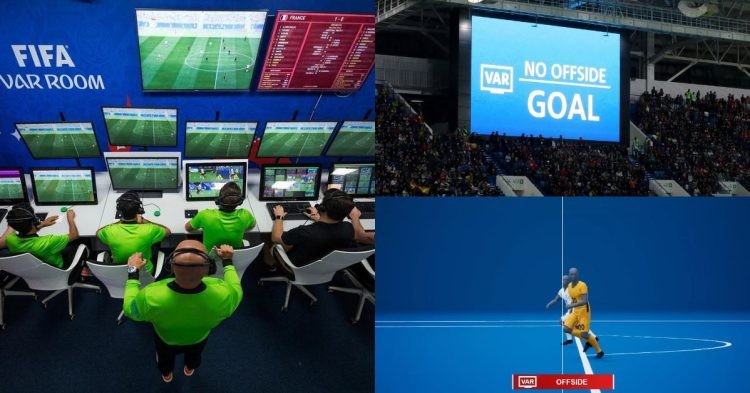 VAR and its various uses (Credits: Digital Trends, FIFA and The Telegraph)

Virtual Assistant Referee (VAR) was introduced in football in the 2018 World Cup and will now be used in the FIFA World Cup 2022. Since its introduction, it has seen its fair share of controversies. There have been various occasions where its drawbacks have been exposed but some examples of its usefulness are also visible.

The problem is obviously not in the technology. Major controversy has occurred in the VAR only in the English Premier League. This is due to the poor refereeing already prevalent in the country, going back decades, and also the ambiguity in the rules.

The procedure and uses of VAR

The VAR is used during three instances in football. It checks the authenticity of a goal, whether a foul or any infringement of the rules has taken place. VAR also checks any action within the penalty box and decides if there is any “clear and obvious error” in the referee’s decision.

The VAR also checks if certain red card decisions by the referee need to be overturned. This only happens if the VAR decides it is a “clear and obvious error”. The decision can be called by the VAR himself, or the VAR can direct the referee to check the on-field screen. This is called on-field review (OFR) and occurs only if the VAR feels the referee is required to do so.

VAR has been used in the previous edition of the World Cup in 2018 in Russia. It was the first competition to use VAR at all matches in all venues. According to FIFA, it had a success rate of 99.3% in the tournament, which led people to believe in its potential. This potential seems to have been upheld across Europe, except in the Premier League.

Objective decisions like red cards and offsides have seen the greatest VAR success rate. On the other hand, subjective decisions have received much less success. Nevertheless, the VAR will be used in the FIFA World Cup 2022.

In the Qatar World Cup, FIFA announced the introduction of semi-automated offside technology. A FIFA statement read, “It will be a new support tool which will help referees make faster, more accurate and more reproducible offside decisions on the biggest stage of all”. The World Cup will start on 20th November with hosts Qatar facing off against Ecuador.

The FIFA World Cup always brings its set of drama, which will only be compounded by VAR and its subjectivity and controversy.