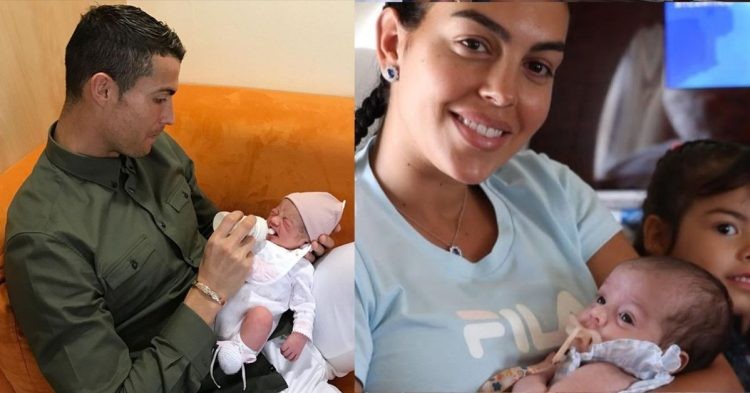 Cristiano Ronaldo and Georgina Rodriguez with their children (Credits: Twitter)

In new footage from his explosive interview with Piers Morgan that was aired on Monday, Cristiano Ronaldo made several more claims against Manchester United.

The veteran forward said that when he alerted senior officials that his daughter Bella was having health problems over the summer, they did not believe him.

In July of this year, Bella Esmeralda, Ronaldo’s daughter, was admitted to the hospital with bronchitis.

Cristiano Ronaldo: “The executives at Manchester United didn't seem to 100% believe my newborn daughter was ill. It's painful because they didn't take my word for it”. 🔴 #MUFC

“That's why I didn't attend the pre-season preparation camp. I had to be there for my family”. pic.twitter.com/fNfYtnJy9l

The legendary Portuguese player had to abandon his preseason with Manchester United in order to visit his daughter. On July 7, the club announced that he would not be joining Ten Hag and his team.

Ronaldo recently disclosed that this wasn’t the case, despite the fact that it appears to be relatively easy and accessible from the outside.

To care for his daughter, the Portugal captain skipped his team’s preseason with Manchester United. But Old Trafford’s senior leadership viewed him with distrust.

Cristiano Ronaldo, the team’s star forward, has criticized Manchester United for not believing in him when he arrived “late for pre-season” because of his “daughter’s condition.”

When his ailing kid was brought to the hospital in July, Cristiano Ronaldo blasted Manchester United for not “supporting” and “trusting” him.

"They didn't believe that something was going wrong."

Cristiano Ronaldo has told Piers Morgan he felt doubted by his Manchester United bosses when he told them his newborn daughter was sick.@cristiano | @piersmorgan | @TalkTV | #PMU pic.twitter.com/Y2jDLFR62J

Ronaldo claimed that when he failed to appear on time for preseason practice. The Old Trafford club mistrusted him and lacked compassion.

Cristiano Ronaldo received condolences from all over the world, including from the Royal Family. Ronaldo characterized the loss of his child as the “worst grief” he had ever experienced.

In the same explosive interview, Ronaldo stated that he felt “betrayed” by Manchester United. Evidently, that the club’s leadership, including manager Erik ten Hag, is trying to get rid of him.

In an explosive interview with Piers Morgan, Cristiano Ronaldo elucidated, “I spoke with the director and the president of Manchester United and they kind of didn’t believe that something was going wrong, which made me feel bad.”

“I am never going to change the health of my family for football. Now, or 10 years behind or forward.”

"I will not exchange the health of my family for football. Now, 10 years before or 10 years from now. Never." pic.twitter.com/oZ4JSVgKSJ

Ronaldo continued, saying that his family was struggling with everything that was going on. Evidently, he spent a week in the hospital with his daughter.

Whether United will try to transfer him, terminate his contract entirely, or retain him on the roster but off the squad sheet is still up in the air.

The two teams will temporarily take a break from one another while Ronaldo is in Qatar with Portugal for the World Cup.