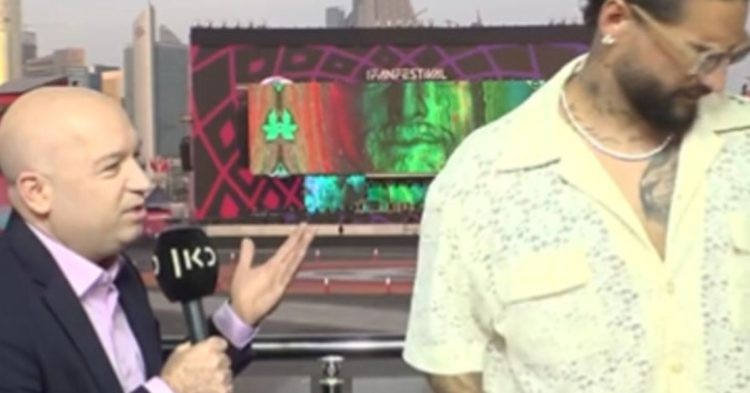 Maluma is a singer, composer, and actor from Colombia. He was recently questioned about his choice to perform at the World Cup despite the human rights abuses in Qatar.

Maluma questioned whether he was required to respond to the question at first, and as the interviewer pursued the matter a bit more, he left the room.

Maluma is in Qatar doing press ahead of the eagerly awaited soccer event after the release of his official FIFA World Cup single, “Tukok Taka”, which he co-wrote with Nicki Minaj and Lebanese vocalist Myriam Fares.

We are ready for 2022 Qatar World Cup with The QUEEN,Maluma and Myriam Fares🥺. pic.twitter.com/erhLlIzV9v

The Colombian star, however, left an interview early this week unhappy after being asked a question on Qatar’s infringement of human rights.

What a way to kick off the FIFA World Cup! On November 19, at the inauguration of the Doha FIFA Fan Festival in Qatar, Maluma and Fares will perform their song “Tukok Taka.”

The Colombian singer was questioned about why he didn’t boycott the Qatar tournament like Shakira and Dua Lipa in an interview with Israel’s Kan TV.

Due to Qatar’s breaches of human rights, the reporter stated that the aforementioned singers declined to perform at this occasion.

The reporter asked Maluma, “Don’t you have a problem with human rights violations in this country?”

Maluma walks out of interview after being questioned about his decision to perform at the World Cup despite Qatar’s human rights violations. pic.twitter.com/h9OlX7wutN

He then replied, “Yeah, but it’s something that I can’t resolve. I just came here to enjoy life, enjoy soccer – the party of soccer. It’s not actually something that I have to be involved with. I’m here enjoying my music and the beautiful life. And playing soccer too.”

Even so, the reporter continued. Maluma interrupted him by asking his presumed team, who are out of the camera’s view, if he has to respond.

He continued, “But can you understand just people are going to say the very presence of you here you are helping whitewash-,” but got interrupted.

Following that, Maluma stands up and begins to leave. The Colombian superstar replied, “You’re disrespectful,” in response to the host’s question about the issue. Following that, the presenter retorted, “This is what people say.”

What is Maluma’s net worth?

In January 1994, Maluma was born in Medellin, Colombia. Maluma, a singer, songwriter, and record producer from Colombia, has a $12 million fortune.

His musical genres include pop and reggaeton. 2012 saw the release of Magia by Maluma on Sony Music Colombia.

Additionally, he was a part of Shakira and Ricky Martin’s #1 hits, “Chantaje” and “Vente Pa’ Ca.”