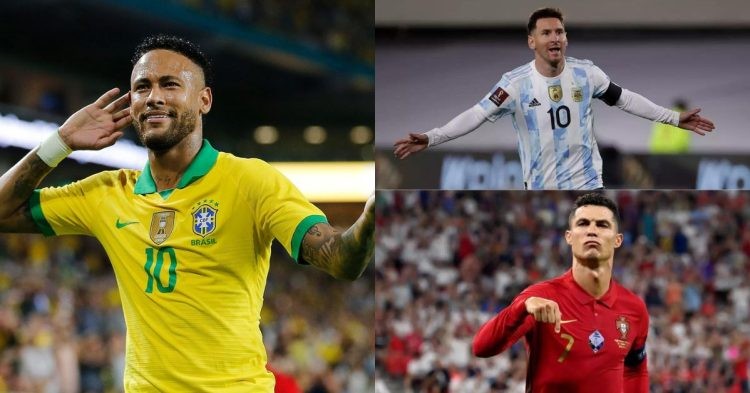 Lionel Messi, Cristiano Ronaldo, and Neymar Jr are the biggest names in the World Cup this time around. The World Cup began on 20th November and has already impressed many fans. It has already brought us an upset, with Saudi Arabia coming from behind to win 2-1 against Argentina. All three will be looking to overhaul France and win their first World Cups.

Messi and Ronaldo are set to play their last World Cup, with Messi having officially made the announcement. Ronaldo has said he would like to play only until he is 40, ruling him out of the 2026 World Cup, by when he will be 41. Portugal begins their World Cup against Ghana, while Brazil takes on Serbia.

Messi has been one of the best players for Argentina. Along with Diego Maradona, Messi is the most loved Argentine footballer on the planet. He has made 166 appearances for Argentina, scoring 92 goals so far. The 35-year-old is set to play his fifth and last World Cup this year. He recently won his first major international title in 2021, the Copa America title with Argentina.

Unfortunately for Messi, Argentina’s start to the World Cup was disappointing. They were one goal ahead and had three goals ruled out for offside in the first half, and looked favorites to run through Argentina. But a lackluster second half saw them lose to Saudi Arabia, with Poland and Mexico left to face.

Ronaldo is the top goal-scorer internationally in the world. Along with Messi, he is set to play his fifth and last World Cup. He has been declared by many as the best player ever to have played for Portugal. He won his first major international title in 2016, the Euros with Portugal.

Portugal begins their World Cup against Ghana on 24th November at 11 am ET/8 am PT. They then face Uruguay and South Korea. Ronaldo heads into the World Cup having made 191 appearances and scoring 117 goals since his debut in 2003.

Brazil has had a huge number of superstars in its glorious history. Ronaldo Nazario, Ronaldinho, and Kaka are just a few of the huge names that have graced this game from Brazil. Brazil is also the most successful team in the World Cup having won the title 5 times. A new superstar, Neymar, emerged from Brazil and has now not won the World Cup since 2002.

He made his international debut in 2010. He has made 121 appearances for Brazil, scoring 75 goals. Neymar and Brazil begin their World Cup campaign against Serbia at 2 pm ET/ 11 am PT. They then face Switzerland and Cameroon.