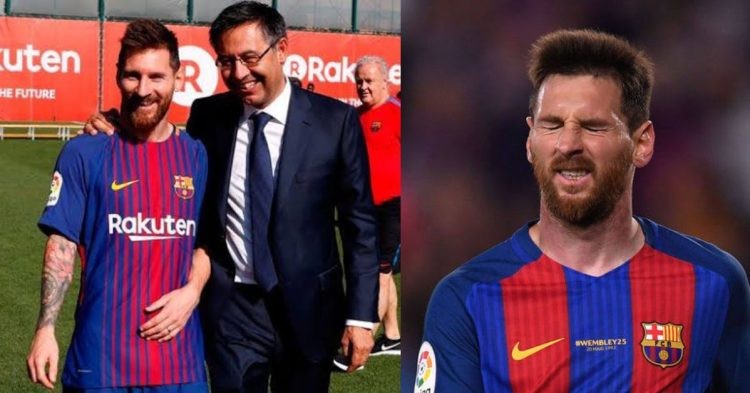 Lionel Messi and FC Barcelona is the reunion every soccer fan wants to see before the Argentinean hangs his boots. The Barcelona fans adore the little Argentinean and still hope for a comeback after his PSG spell. However, the reunion seems to be in massive jeopardy, following a distasteful chat leak of ex-Barcelona higher-ups.

Lionel Messi is comfortably the best player in the history of the Catalan club. He joined Barcelona at the tender age of 17; with bags of potential and boy, he delivered every bit of it. Leo went on to spend his next 17 years at the Spanish club scoring 474 goals in just 520 matches. He won every single possible trophy for the Spanish giants, leaving an untouchable legacy.

Barcelona had to let their most decorated player leave under bad financial conditions. Messi’s contract was up in 2021 due to La Liga’s financial fair play rule. Barcelona wasn’t allowed to extend his contract anymore. The Argentinean left as a free agent in 2021 and joined the French giants PSG.

What did Barcelona board members say about Lionel Messi?

Barcelona was a financial mess in 2021, thanks to some very unrealistic transfers committed by the Barcelona higher-ups. Josep Maria Bartomeu was the club president then and the fans absolutely slammed him for his extremely poor judgments, which caused a lot of players to forcibly lower their salaries, and the same situation saw Leo Messi leave the club.

Bartomeu was forced to resign by the majority of the fans after putting the club in significant danger. The fans and Lionel Messi won’t be happy with El Periodico’s latest publication. The Spanish source released a series of disgraceful and personal-attacking WhatsApp chats targeted towards Messi, between the former Barcelona higher-ups just after Messi’s departure.

❗In the whatsapp texts gathered by the Police, Roman Gomez Ponti, Head of Legal Services under Bartomeu, can be seen addressing Lionel Messi as a ‘sewer r*t’ and ‘hormonal dw*rf’ and Gerard Piqué as ‘son of a b*tch’.

He is also accused of leaking their contracts.

Roman Gomez Ponti, the head of the legal services of the club at that time, threw the vilest attacks. He said, “Barto, really, you can’t be such a good person with this sewer rat. The club has given him everything and he has dedicated himself to marking a dictatorship of signings, transfers, renewals, and sponsors just for him,” addressing the ex-Barca president, talking about how Lionel Messi took charge of the club’s decisions.

Ponti went ahead and added, “And above all, the accumulation of blackmails and disrespect that the club and those of us who work at the club have suffered from this hormonal dwarf who owes Barcelona his life… ah!,” pointing out Messi’s Growth Hormone Deficiency (GDH) problem, in which the club helped him massively.

Bartomeu responded to Ponti’s message by saying “I agree on many things, but first Barcelona and this type of article hurts the club’s image,” agreeing to the head of legal services. The club’s senior officials were getting a lot of criticism at that time and these distasteful chats are a clear result of that. They went on to address other club legends like Gerard Pique and Sergio Busquets in the same way as well.