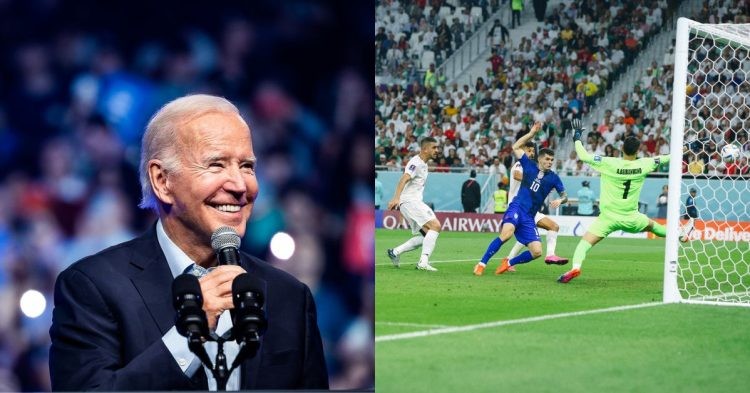 The 2022 FIFA World Cup has not failed to surprise us one bit with all the drama. Considering all the issues going on in Qatar, it seems like this year’s World Cup will be remembered for years to come. There has been recent drama surrounding the internet, involving the USA.

For those who don’t know, the USA had done something to Iran’s flag a few days ago, that angered plenty of Iranians. They removed the Islamic Republic’s emblem on the country’s flag when displaying the groups on their social media. This did not go well with Iran, which wanted FIFA to kick the USA out of the World Cup.

We believe that we will win. pic.twitter.com/Q03F8so0mK

That is not all that has happened recently. The President of the United States, Joe Biden, posted a tweet to motivate the USMNT players. He said, “We believe that we will win.” The USA was going to face Iran for the last game in the group stages. It was a do-or-die game for the Americans, as a win was a must to qualify for the last 16.

In the end, the “LeBron James of soccer”, Christian Pulisic, came through with the only goal of the game. This even attracted a response from Joe Biden. He replied to his tweet from earlier, saying “We did.”

It seems like Joe Biden won the hearts of many Americans as well. USMNT fans replied to his tweet, after their country won over Iran and qualified for the knockout stages.

Yes ! Thanks for your inspiration

Thank you for giving us this win. We knew we could win if we believed we could.

Many believe that the President and the First Lady gave the hope that the entire country needed. The USMNT has not won the World Cup since its introduction. The furthest they have gotten is to the semifinals, at the 1930 FIFA World Cup. Can they go further this time around? But that might not be the question on soccer fans’ minds once they find out about the revelations coming out about Iranian players.

Why are Iranian soccer players likely to face arrest after 1-0 loss to the USA?

Iran has been involved with quite a bit of controversy at the World Cup in recent times. And it seems to be continuing as well. Before their game against England, Iranian players did not sing their national anthem. This angered the country’s leaders, who threatened to arrest the Iran National Team soccer players, according to the New York Post.

Reports say that a win against the USA yesterday would have helped change that outcome, if there was a chance of that happening. It is believed that the Iranian soccer players had to “behave” against the USA in order to keep the authorities happy.

If these revelations are true, it could turn the soccer world upside down, mainly because the World Cup is still going on, and it would be shocking to see an entire team of soccer players arrested.