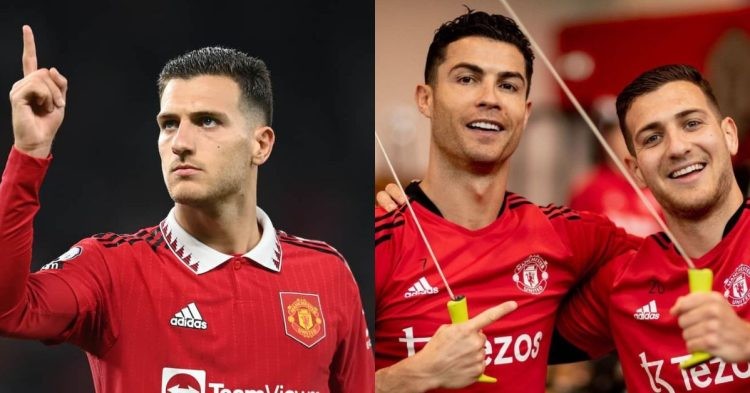 Diogo Dalot and Cristiano Ronaldo (Credits: The Peoples Person and United In Focus)

Piers Morgan‘s interview with Cristiano Ronaldo concluded last night. Some fans have sided with Ronaldo on the matter while some have taken the side of Erik ten Hag. United fans seem to have chosen their manager over one of their greats, citing that ‘nothing is bigger than the club’. In his interview, Ronaldo did praise some players in the Manchester United dressing room.

Cristiano Ronaldo on top professionals: “Diogo Dalot for sure, he’ll have a great career with longevity. Also Martinez and Casemiro. But yes, Dalot is a top professional”. 🔴🤝🏻 #MUFC pic.twitter.com/RF57RmniDl

Ronaldo was asked about young players in both United and the clubs he has already played at. Ronaldo was left unimpressed by the young players of the current generation. He said they were distracted and not as motivated as he was in his younger days. He has called Diogo Dalot, Lisandro Martinez, and Casemiro the only players who resemble the hunger he used to have when he was younger.

Speaking on the difference between young players when he played and now, Ronaldo said that young players, not only in Manchester United, do not care as much as his generation “Their hunger. I think they have things more easily. They don’t suffer.”  He said that they cannot be blamed either, as, with a new generation and new technologies, they have gotten distracted. Ronaldo gave his example of following players like Giggs, Keane, van Nistelrooy, and Rio Ferdinand.

🚨 Cristiano Ronaldo: “I really thought everything would have changed at Man Utd after 13 years. But then I was surprised – in a bad way. Everything was the same.”

It seems that young players of new generation don’t care. They don’t have the hunger.”

“I’m not the kind of guy who likes to give advice, as I prefer to be an example. I am probably the first one to arrive and the last one to go out. I think the details speak for themselves. But this generation, it’s like they listen to one thing and in two minutes they have already forgotten it, and they do whatever they think it’s better.” He cited this as the reason for his longevity, along with taking care of his mentality and physicality.

Ronaldo also gave a damning verdict on his teammates this season. He singled out only Dalot, Martinez, and Casemiro, already in his 30s, with having the mentality and discipline to have a long career. “If you ask me what I see in Manchester United, I can mention probably Dalot. He is young, but he is very, very professional. You have a few more, it’s difficult to say Lisandro Martinez, and Casemiro and he’s in his 30s – but I will say Dalot.”

Dalot’s stats this season shows his proficiency in both attacking and defending. [@RobDawsonESPN]#mufc‘s most improved player this season? pic.twitter.com/rRwb9JFocU

Diogo Dalot has been an absolute star for United on the right-hand side this season. While Luke Shaw and Tyrell Malacia have enjoyed spells of good performances, Dalot has become undroppable. When he was at AC Milan, the club wanted to keep the star for his excellent work rate and talent. His contract at United expires this summer, and they should be doing everything in their power to keep the Portuguese at Old Trafford for a long time.

Dalot has played a staggering 20 matches already so far this season. He has scored one goal and provided one assist so far. He has a 78% pass accuracy in a resurgent United side, that has unfortunately played counter-attacking football in a few games this season. Dalot has won 85% of his tackles. He has surprisingly won 68% of his aerial duels, as compared to only 58% by Harry Maguire and 48% by Luke Shaw.