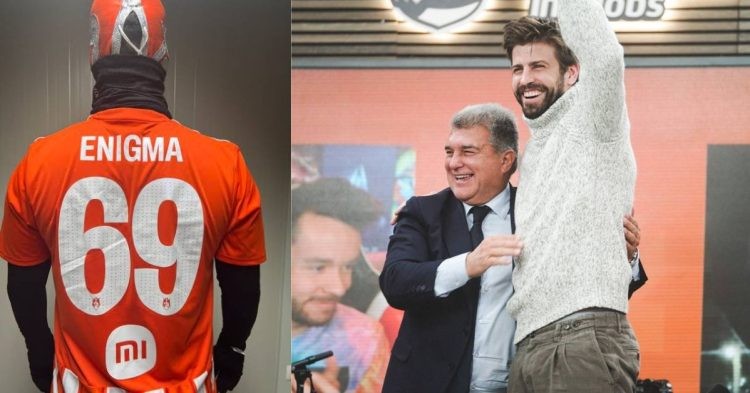 The tournament kicked off at the start of this month and has invited special guests to play in those matches. Last Sunday Pique unveiled that a very special guest will be appearing on Sunday. Pique also said that he doesn’t want to reveal his identity and will play for the XBuyer team.

Very well-known Spanish streamer Ibai Llanos added to that, “He’s a first-division player and he’s going to wear a [Mexican] wrestling mask and cover his body so his tattoos won’t be recognized.” This added more anticipation to the suspense. The player came out wearing the number 69 on the back with the name ‘Enigma’ written on his back.

Enigma was welcomed with a huge cheer on the pitch. However, that’s where the positivity ended for the masked man. He had a horrible game. Victor Aroya described his performance like this,”He looked out of shape and was wearing the wrong footwear. He slipped over three times in the match,” in his review.

There were more than a few guesses about who can ‘Enigma’ possibly be. People suggested that it can be ex-Real Madrid player Isco, who is currently a free agent after going separate ways from Sevilla in December. Fans also suggested that the masked man is Real Madrid’s Eden Hazard. A few suggestions were also about him being former Barca midfielder Denis Suarez.

A user guessed, “Didn’t they already say it was Denis Suarez? It can’t be someone linked to Real Madrid.”

The guesses got proved wrong when Ibai Llanos himself mistakenly spilled the beans about Enigma’s actual identity. His quote, “A lot of people thought it was Isco because his physique is similar to Nano Mesa’s,” made the fans suspect. Things got clearer when Sergio Aguero, the president of XBuyer, the team Enigma 69 player released a comment. The former city man said, “someone who used to play for Cádiz,” when talking about him.

The above statements gave away the identity of the masked man as Nano Mesa. The former 27-year-old Cadiz striker was contracted to the club till last June. Currently, he is a free agent without a club, and looks like has gotten quite out of shape in the past few months.

It is always a big risk to twist some rules of a certain sport and then actively include individuals into that who are not at all sportspersons. Fans always seem to be skeptical about these situations and the same thing happened with Pique’s Kings League. He and streamer Ibai Llanos are the heads behind the idea and it seems like they are executing it very well.

Legendary Iker Casillas and Sergio Aguero have come on board with the idea of the 7-a-side tournament, with the former defender also having their own respective teams. The tournament has some bizarre rules. And it looks like; they are working positively in favor of the competition. The tournament cannot have any draws. If the score is tied, the match goes to penalty.

More twist comes with it, as the penalties aren’t normal. The penalty taker has to start dribbling with the ball from the middle of the field and then try and score. There is no limit to substitutions in the 40-minute match. The bookings are innovative as well. A player with a yellow card gets binned for 2 minutes and the player who sees red gets binned for 5.

Starting from January 1 this year, the tournament is in the last four stage, which will take place at Barcelona’s home, Camp Nou. 300,000 viewers on average have watched the first edition of the Kings League. It looks like that, this indoor 7-a-side tournament has the potential to become a major entertainment factor in the future.