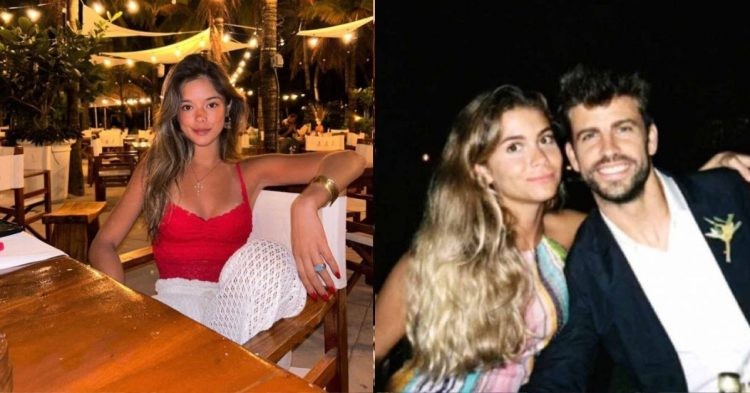 New reports in Spain have emerged saying Gerard Pique cheated on Clara Chia Marti by getting involved with Julia Puig. Spanish journalist Jordi Martin posted a picture of Julia on his Instagram story. He captioned it in Spanish, here’s a translation, “do you know her, Gerard? Then don’t be surprised that Shakira throws the whole world on top of you”.

Earlier, Jordi Martin accused Pique of issues in his company called Kosmos. He wrote, “Dismissed several of his lovers. Some of them very close to him on which they had been working for years. 0 the courage or doing it personally. Or in a person so that he would do it so to those who have always given the face for him until now. Huge discomfort in Kosmos and be careful because when feeling betrayed can come out of many dirty laundries.”

Jordi has been closely covering the story of Pique and Shakira and has been openly supporting the Colombian singer. He has repeatedly blamed Pique for the issues cropping in the lives of the ex-soccer player and Shakira.

Since the release of Shakira’s song ‘BZRP Music Sessions #53’, there have been reports of Clara staying away from Pique to avoid media attention. In the song, Shakira has fired shots at both Pique and Clara for whatever they have done to destroy Shakira’s life. However, according to new reports, it seems Clara has moved out of Pique’s house for some other reason.

Julia is a young lawyer, much about whom is not known. After Jordi uploaded the story, Julia was quick to make her Instagram account private, however, whatever information some fans could gather, they did. According to reports, she is a lawyer with a master’s degree in commercial criminal law and corporate compliance. She also likes to travel with friends as seen on her profile.

After Shakira made three songs due to her breakup with Pique, the Colombian singer could finally be even with karma. Apparently, according to Music Mundial, Shakira had already learned of the alleged infidelity of Pique. The fact he cheated on his new partner, Clara as well.

The ‘Hips don’t lie’ singer seems to be achieving all that she had desired since it was revealed that Piqué had been unfaithful to Clara with Julia.

Shakira deduced Piqué was cheating on her after she returned from traveling to find that her strawberry jam was eaten.

Piqué has never eaten jam in his life. pic.twitter.com/2OpKhkP7ih

The news of Pique’s infidelity has quickly gone viral. Many Shakira fans are sure that she would be having a great time. It seems that karma is finally doing its thing and putting stuff in order. This revelation has come after it was found that Shakira allegedly understood Pique’s infidelity with her when she found an empty jar of jam in her house.

It is, however, not yet known if Shakira will go on to release a new song referring to the twists. Some rumors are already stating that a part two with Argentine rapper Bizarrap would be more than welcome.