“Why Are You Playing in This League?” – Lionel Messi Expresses Disappointment With Cristiano Ronaldo? Fans Try to Guess PSG Star’s Thoughts in Iconic Photo 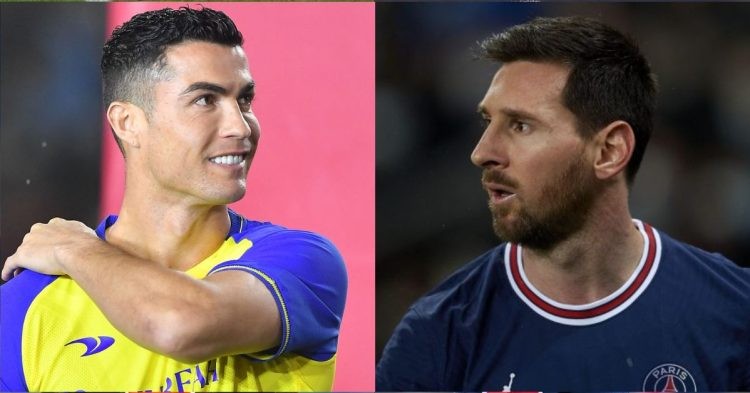 The biggest rivalry in soccer was renewed once again as Lionel Messi faced Cristiano Ronaldo in an exhibition match between PSG and Riyadh XI in what could have possibly been the last dance in this rivalry that has defined soccer for over a decade and both of the superstars have headlined the sport for so long that it feels weird to think that their careers are nearing the end.

The game took place in a packed King Fahd International Stadium in the Saudi Capital of Riyadh in a state-sponsored event called the Riyadh Seasons. Saudi authorities have been trying to uplift the sport in the country and with the coming of Ronaldo to Al-Nassr, rumors of Messi joining Al-Hilal, and now PSG traveling to Riyadh, the Saudi authorities will be really happy.

The crowd in the stadium and fans all over the world were treated to a thrilling attacking display by both teams as both Messi and Ronaldo got on the scoresheet. Messi started the proceedings in the 3rd minute but Ronaldo equalized with a penalty in the 34th minute. For PSG the other scorers were Marquinhos, Ramos, Mbappe, and Hugo Ekitike while Ronaldo was once again on the score sheet for Riyadh joined by Hyun Joo Song and Talisca.

The two superstars shared an iconic moment just before kick-off where Messi could be seen staring at Ronaldo and the look in Messi’s eyes has left fans guessing as to what the Argentine World Cup winner was thinking while looking at his biggest rival, Cristiano Ronaldo.

The match had a thrilling end and finished 5-4 with 10-man PSG finishing as the winners in the final showdown between Lionel Messi and Cristiano Ronaldo. Soon after the game ended, fans voiced their opinions about what they thought Messi had in his mind while the iconic picture was taken.

We went to Twitter to have a look at how fans reacted to this iconic moment:

One fan could be seen trying to deduce the iconic picture and concluded with a theory that maybe Messi was thinking as to why Cristiano is playing in the Saudi league after dominating European football for over a decade.
He said: “I think it’s difficult to predict the meaning of Messi’s eyes on Ronaldo, as well as what was in Messi’s mind at that time. Maybe Messi’s thinking: why are you playing in this league??”

I think it’s difficult to predict the meaning of Messi’s eyes on Ronaldo, as well as what was in Messi’s mind at that time. Maybe Messi’s thinking: why are you playing in this league??

Another fan tried to decipher the picture and he concluded that maybe Messi was nostalgic about all the past games that the two superstars have played against each other. He said: “Maybe he (Messi) was feeling nostalgic”

Maybe he was feeling nostalgic

Another fan talked about Messi missing the famous El Clasico rivalry between the two. Both Messi and Ronaldo have gone head to head in numerous El Clasicos where both wanted to get the better of each other. He said: “Messi: I actually miss that El Clasico Rivalry”

Many fans admire both of them equally. One fan uploaded an image with the caption: “They act like two legends can’t coexist”

The admiration for both of them by millions of fans was on display yesterday as both were the hottest topic in the world in the last 24 hours and why would they not be, they are both the GOATs of this era and this was their last dance but we hope we get to see more of them head to head against each other.