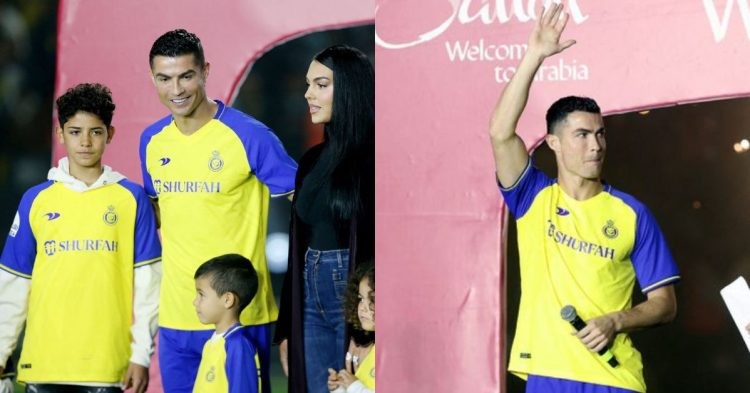 Cristiano Ronaldo being presented to the fans at Mrsool Park, Riyadh. (Credits: Twitter)

Cristiano Ronaldo is officially an Al-Nassr player after he was unveiled by the club at their stadium. In front of a packed audience at Mrsool Park, Ronaldo was introduced to the Al-Nassr fans on Tuesday.

Our kind of welcome 🫡🔥 pic.twitter.com/B62agQADIt

Ronaldo signed a bumper contract worth over $200 million at Al-Nassr. He admitted that he had won “everything in Europe” and now looks forward to a new challenge in Saudi Arabia. Speaking at the press conference on Tuesday, Ronaldo said: “I am so proud to make a big decision in my life. My work in Europe is done. I won everything. I played for the most important clubs. For me now, it is a new challenge in Asia.”

“I’m grateful that Al Nassr has given me this opportunity to develop not only football but also the young generation, the women’s generation. For me, it is a challenge, but I feel very happy and very proud,” Ronaldo said, adding that he had multiple proposals from clubs all over the world but still signed for Al-Nassr.

What is the meaning of Ana Alami?

Ronaldo was unveiled to the Al-Nassr fans at their home ground called Mrsool Park. Before he was called into the stadium, Ronaldo was shown meeting his new teammates in the dressing room and having a chat with them.

After introducing Ronaldo to the Al-Nassr fans and having a chat with him, a female presenter taught him how to say “Ana Alami.” Ronaldo shouted “Ana Alami” to announce his arrival. The phrase “Ana Alami” means “I am global.” It is in relation to the nickname of the Saudi club. Al-Nassr is also called “Al-Alamy” (The International Club).

Ronaldo has signed a deal until 2025 with the Saudi Pro League side. He is set to receive more than $200 million (£172 million), according to Saudi state-owned broadcaster Al Ekhbariya. The Portuguese is officially the highest-paid soccer player in the world.

Ronaldo’s salary for his on-field duties will actually amount to $75m. The rest of the package is made up of image rights and commercial deals.

Al-Nassr, who leads the Saudi Pro League, will play Al Taee at Mrsool Park on Thursday, January 5, 2022, at 7:00 am PT and 10:00 am ET. However, it is unlikely Ronaldo starts that match as he might be deemed unfit with very little training before Thursday. It is likely his first Al-Nassr game is the Riyadh derby away to Al-Shabab on January 14.