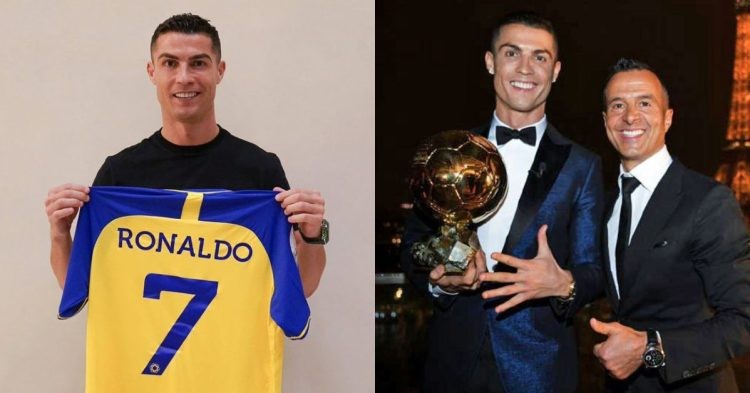 Cristiano Ronaldo has reportedly split with superagent and friend Jorge Mendes. Major cracks between Ronaldo and Mendes began to appear just before the Portuguese soccer star gave his explosive interview with Piers Morgan. Apparently, Mendes did not want Ronaldo to give the controversial interview but Ronaldo did not listen.

Ronaldo returned to Manchester United in the summer of 2021. The return caused much fanfare. However, he wanted to leave the club after just one season. Last summer, Mendes, who has been with the Portuguese since he first moved to United, tried to look for a Champions League club for him. But Mendes failed and Ronaldo had to continue at the UEFA Europa League playing United.

Ronaldo wants to go. United are open to letting him leave. No one’s come in with a concrete offer.

Manchester United and Ronaldo are stuck in a tough place 🤷‍♂️ pic.twitter.com/ugY2H5Z68p

Erik ten Hag was appointed manager of Manchester United in the summer of 2022. What could have been a fresh start for Ronaldo turned into a disaster. He failed to make an impression in front of the Dutch manager. The 37-year-old started just four games in the Premier League under the new manager.

Disappointed with the treatment, Ronaldo took matters into his own hands. He forced an exit by giving an explosive interview with British broadcaster Morgan. United and Ronaldo mutually terminated their contract in November while the FIFA World Cup 2022 was being played in Qatar.

Why did Jorge Mendes not want Cristiano Ronaldo to do the Piers Morgan interview?

As per Portuguese outlet Publico, Ronaldo’s agent Mendes tried to stop him from giving the interview because he believed United was the only major European club that would have Ronaldo at that point. Mendes believed that an exit from United would mean an end to his European career. However, Ronaldo thought differently.

🚨 After 20 years in partnership, Cristiano Ronaldo and his agent Jorge Mendes no longer work together. ❌

Cristiano’s explosive Piers Morgan interview was a turning point and signalled the end of their relationship.

Ronaldo seemingly believed an impressive showing for Portugal at the World Cup would attract suitors. However, he was benched for the round of 16 and quarter-final matches. Even in their three group-stage games, he did not put up a great show and netted just one penalty. This further hampered his chances of attracting a big European club.

Who negotiated Ronaldo’s contract with Al-Nassr?

Ronaldo’s transfer to Al-Nassr was not negotiated by his agent Mendes but by his friend and personal manager Ricardo Regufe. Regufe has known Ronaldo since the early 2000s. His working relationship with Ronaldo involved briefing him about the commercial interest. However, he started getting into the sports side recently.

#NewProfilePic Ricardo Regufe, the “personal manager” who bodied Jorge Mendes, convinced Ronaldo to sign for Al Nassr, and pocket himself a cool €30 million. The master! pic.twitter.com/IO4WfgLuWp