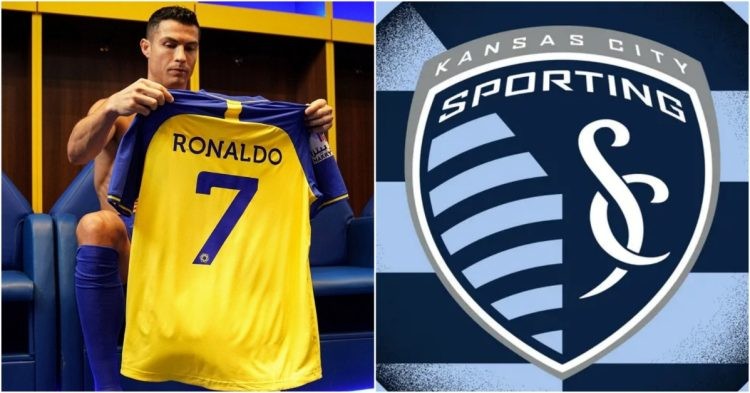 5-time Ballon d’Or winner Cristiano Ronaldo has opened a new chapter in his career by joining Saudi Pro League side Al-Nassr. He did so after mutually terminating his contract with his former club Manchester United. Ronaldo was looking for a club after the bitter exit. But, his search came to an end after signing with Al-Nassr.

Even during his time at Manchester United and during the World cup as well, rumors surfaced that Ronaldo was in talks to join the Saudi Arabian side.

Despite such rumors, fans still believed that Ronaldo will find a top European club so that he can continue his UCL journey. However, on December 31st, Al-Nassr’s official Instagram handle confirmed the signing of Cristiano Ronaldo. However, if report are to be believed, it all could have been different.

According to a report from ESPN analyst Taylor Twellman, Cristiano Ronaldo’s team held multiple talks with Kansas City’s executives for the Portuguese to make a move to the MLS. As per Twellman, packages including wages and commercials were close to matching Al-Nassr’s. CR7 was even tempted by the offer!

Multiple @MLS teams inquired about Ronaldo and his future but 1 team was already at the table: @SportingKC
Their offer was so compelling that Ronaldo’s team had multiple meetings w/SKC before taking the Saudi deal. The package (wages/commercial) was said to be “very close”. #MLS

Renowned Journalist Fabrizio Romano also tweeted the report that Kansas made a last-ditch attempt to sign the superstar. Even Ronaldo himself hinted at it during his unveiling ceremony. He stated that many clubs all across the globe made an effort to secure his services.

Sporting Kansas City were really trying to sign Cristiano Ronaldo. SKC held a meeting before Morgan interview then one more with concrete talks about the prospects of CR7 playing in Kansas City commercially 🇵🇹🇺🇸 #MLS

Although the exact reason for Ronaldo rejecting Kansas city is not very clear, Ronaldo’s legal case with Nevada resided teacher Kathryn Mayorga might be a reason why CR7 didn’t insist on living in the US.

The sporting culture of the United States can also be a reason as the country’s sports interests are diversely divided among other sports like NFL, NBA, etc, unlike a sole monopoly interest in soccer which is mostly the case in the countries Ronaldo played in.

Why did Cristiano Ronaldo choose Al-Nassr over Kansas City?

As presented by himself, Cristiano Ronaldo likes to take up new challenges, and playing for Al-Nassr is certainly a change of scenery for him. Although he will not be in a top European league, Ronaldo will certainly get to experience a new side of the sport in Asia.

Ronaldo is also impressed by the vision of Saudi Arabia as they have filed a nomination to host the 2030 FIFA World Cup. The 37-year-old also like the way the club are promoting soccer in the middle east.

As reported by The Athletic, Ronaldo said “I’m thrilled for a new experience in a different league and a different country, the vision that Al Nassr has is very inspiring. “I’m very excited to join my teammates, and to help the team to achieve more success.”

Cristiano Ronaldo is not just a soccer player. He is also a huge brand that transcends the sport! He was given a hero’s welcome in Saudi. He will also be an ambassador for the country, which will see him becoming the face of the country in its quest to secure the rights to host the 2030 FIFA World Cup. So all in all, the Saudi offer perhaps made more sense for him.

However, his Al-Nassr contract expires only after two and a half years. So there remains every chance that he moves to MLS after his stint with Al-Nassr. Would you like to see Ronaldo playing for an MLS team in the future? Let us know in the comments below.