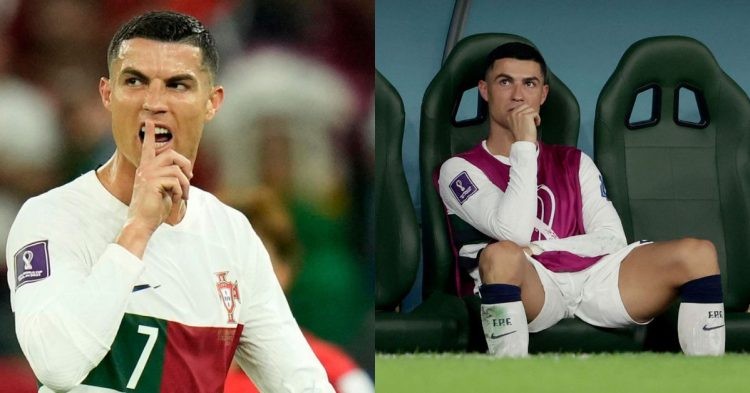 Portugal kick off their first knockout stage game against Switzerland in just under an hour. The biggest news ahead of the game is that star striker Cristiano Ronaldo is on the bench. News had emerged earlier that Ronaldo’s outburst against South Korea had infuriated his manager. Santos had earlier refused to confirm if Ronaldo would captain the side, and has now decided to bench the ex-Manchester United man.

Cristiano Ronaldo will be on the bench for Portugal in tonight’s game against Switzerland. He’s not in the starting XI decided by Fernando Santos. 🚨🔴🇵🇹 #Qatar2022

Ronaldo’s performances in the World Cup have been subpar so far. Even his performances for United in the Premier League, however limited, were not impressive. Many fans also wanted Ronaldo to be dropped because of his poor form at the World Cup. Benfica’s Goncalo Ramos takes his place in the starting eleven, ahead of AC Milan talent Rafael Leao.

Ronaldo had been benched multiple times throughout the season at United. Manager Erik ten Hag had refused to start or bring Ronaldo on as a substitute against Manchester City. United lost the game 6-3, and Ronaldo did not even register a minute. At the time, ten Hag said the decision had been made out of respect for his career.

Santos seems to have benched Ronaldo not just because of his outburst against South Korea, but also his poor performances in the World Cup until now. He scored just one goal, a penalty in the first match against Ghana. Besides, his average ratings for the World Cup so far are a mere 4.5/10.

In a damning poll conducted by a Portuguese news outlet, 70% of Portuguese fans did not want Ronaldo to start against Switzerland. Ronaldo has been a stalwart for this Portuguese side and has captained the side to Euros success. But, it is visible with Ronaldo that time catches up to everyone, even someone who has remained one of the fittest athletes in the sport.

Should Ronaldo be dropped to the bench? 🤔 pic.twitter.com/BUQxNFzWKg

Ronaldo will be 38 in a few months, and he seems to have lost the explosiveness he had built his game upon. The speed and physicality seem to have disappeared from Ronaldo’s game, which could have caused Portugal great problems in the crucial knockout stages. Many fans have backed Fernando Santos’ decision to drop Ronaldo from the starting lineup.

Along with Ronaldo, even Joao Cancelo has been benched. Diogo Dalot comes in for the Manchester City full-back. Both will be looking to make impacts off the bench, and Ronaldo will be motivated now more than ever.