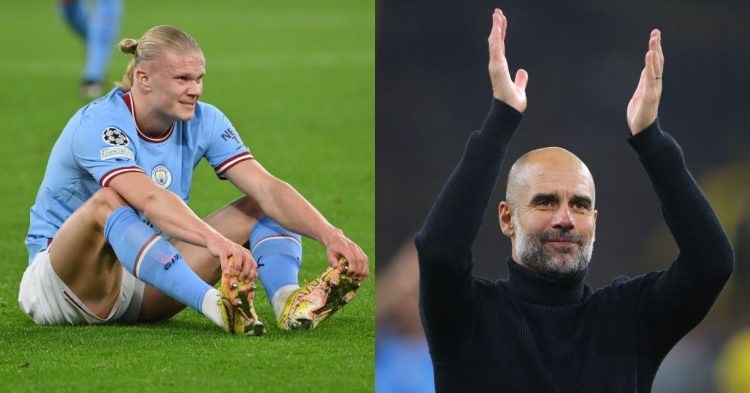 Manchester City recently faced German club Borussia Dortmund at Signal Iduna Park. It was one of the most anticipated matches of the week as Erling Haaland prepared to face his former team.

Considering the form Haaland is in right now, many expected the striker to get on the scoresheet against Dortmund. However, that was not the case for Haaland. Dortmund held City to a 0-0 draw at their home stadium in front of their supporters as defender Mats Hummels brought home the Man Of The Match award.

Some much needed rest for the Machine 🙏🤖 pic.twitter.com/WRvR87gpHf

Another incident that caught the eye of soccer fans was that City’s manager Pep Guardiola had taken Haaland off at half-time. Together with him, he also substituted Joao Cancelo out. It was one that Man City fans were not expecting as both of them are key players to the team.

Can Erling Haaland continue his exceptional form this season amid injury worries?

After the game, Pep clarified his decision for his substitutions during the press conference. He said, “Three things. I saw him so tired. Second one, he had a little bit influenza, in his body, like Joao. Joao played with fever, and third he have a knock in his feet. And that’s why he was not able to play in the second half.”

“We will see what happens”

Speaking about the seriousness of Haaland’s injury, Pep mentioned that he saw the young player walking “More or less quite good” but it is still too early to determine if he will be missing the upcoming matches.

The Norwegian has played a pivotal role in Man City’s success so far this season. Many of his critics claimed that the English Premier League would be too tough for him but Haaland has shot back at all of his haters.

Haaland has scored 22 goals and made 3 assists in 16 games across all competitions this season. 17 of those goals have come in the Premier League. He has been in exceptional form since joining City in the summer. As Pep said, it is still unknown whether he will be missing games due to injury, but if that happens, City will have to face a huge blow in their attacking department.