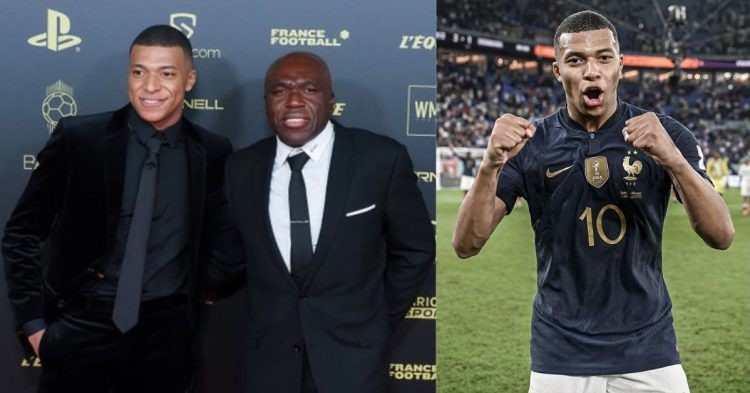 Kylian Mbappe is one of the best soccer stars in the world right now. Aged just 24, Mbappe has already won many accolades that most professional soccer players would just dream of. Mbappe is one of the highest-paid soccer players in the world. He is already on his way to becoming the all-time top-goalscorer for his club, Paris Saint-Germain. However, today, we take a look at Kylian Mbappe’s father, Wilfried Mbappe.

Mbappe is already a World Cup winner when he spearheaded France to World Cup glory in 2018. Although he lost the 2022 World Cup final to his PSG teammate, Lionel Messi’s Argentina, the French star put up a splendid show in the final. Mbappe scored a hat trick in the final, only the second player to do so in a World Cup final since Sir George Hurst in 1966. However, he did end up winning the Golden Boot award in the FIFA World Cup 2022.

Where is Wilfried Mbappé from?

Wilfried Mbappe, the father of French soccer star Kylian Mbappe, is originally from Cameroon. Wilfried was born in 1970 in a place called Douala, which is in Cameroon. Later on, Wilfried moved to France, where he settled in a suburb nearby Paris called Bondy.

However, there is not much information available about Wilfried’s early life. The father of the PSG star has always chosen to not talk much about his private life.

Wilfried Mbappe met his future wife, Fayza Lamari, in Bondy. The mother of Kylian Mbappe has spent most of her life in Bondy. It was here where she met her future husband, Wilfried, and got married to him.

Wilfried Mbappe was a soccer player during his early days. Later on, after moving to Bondy, Wilfried became actively involved in the sporting community of Bondy. After his playing days, Wilfried moved on to become a coach. As per reports from BBC, Wilfried has been part of AS Bondy, a soccer team that plays in the tenth division of French league soccer, for over twenty-five years.

Kylian Mbappé has made a surprise visit to his childhood club, AS Bondy. 💝💚

Atmane Airouche, the president of AS Bondy, once said, “You could say that Kylian was born here at this club. He was here as a baby when his father was a player and a coach. He was always here and learning about football, even as a toddler.”

Wilfried played a huge role in Kylian Mbappe’s soccer career. Mbappe’s soccer career started at AS Bondy, at the time when his father worked at the club as a coach. His performances at Bondy attracted the attention of many big clubs like Chelsea, Liverpool, Real Madrid, and so on. However, even after Mbappe moved from Bondy to Monaco, Wilfried was still involved in his son’s career.

Although not as successful as his eldest son, Wilfried Mbappe has enjoyed some time as a professional soccer player in France. After retiring from soccer, Wilfried continued to remain involved in the sport by working as a coach. Although there are no definitive reports, Wilfried Mbappe’s net worth can be estimated to be approximately $5 million.

👉 €300M signing bonus
👉 €100M a year salary AFTER tax
👉 He will help decide the coach.
👉 He will have a say on the sporting director.
👉 He can approve signings and sales

However, Wilfried currently enjoys a pretty lavish lifestyle thanks to his son, Kylian. According to Le Parisien, after his latest contract with PSG, Kylian Mbappe reportedly earns approximately $128 million annually. Kylian Mbappe is the second-highest-paid soccer star in the world, after Cristiano Ronaldo. Mbappe’s PSG teammates, Lionel Messi and Neymar Jr come third and fourth on the list respectively.

Other children of Wilfried Mbappé

Wilfried Mbappe and his wife, Fayza Lamari, are parents to three children. Their two biological children are Kylian Mbappe and his brother, Ethan Mbappe. Both brothers play for the French club Paris Saint-Germain. While Kylian Mbappe is already one of PSG’s superstars, his 16-year-old brother Ethan is also a rising star for the club. Currently, Ethan plays for PSG’s Under-21 side.

Ekoko, after being born in Zaire (the former name of Congo), moved to France when he was six years old for his education. Ekoko, who lived in Bondy with his uncle and his older sister, was later adopted by Wilfried Mbappe and Fayza Lamari.

Who is Kylian Mbappe’s mother?

Kylian Mbappe’s mother’s name is Fayza Lamari. Fayza was born in France in 1974. Although she is of French nationality, her roots trace back to Africa. Fayza’s mother’s family is ethnically related to the Kabyle tribe of Algeria. She was previously married to Wilfried Mbappe, father of soccer star Kylian Mbappe. However, currently, they are separated.

Fayza Lamari was formerly a professional handball player. She started her handball career playing for the French youth team. After delivering some impressive performances, she was signed by the French club AS Bondy. Later on, Fayza also represented the senior French National Handball team in the late 1990s.

Kylian Mbappé’s entourage confirms tonight that his mother has given an interview with MARCA, BUT that the Spanish paper has twisted her words to: “the #1 option is Real Madrid.”

Mbappé entourage says she said: “he’s closer to an exit,” according to L’Équipe.

Fayza has played an influential role in Kylian Mbappe’s soccer career. Apart from being her son’s biggest supporter, Fayza also advises and guides Kylian regarding various career-related decisions. Time and again, Fayza has come to the support of her superstar son. Last year, when there were rumors of Mbappe leaving PSG to join Spanish heavyweights Real Madrid, Fayza came out with a statement instead of Kylian.