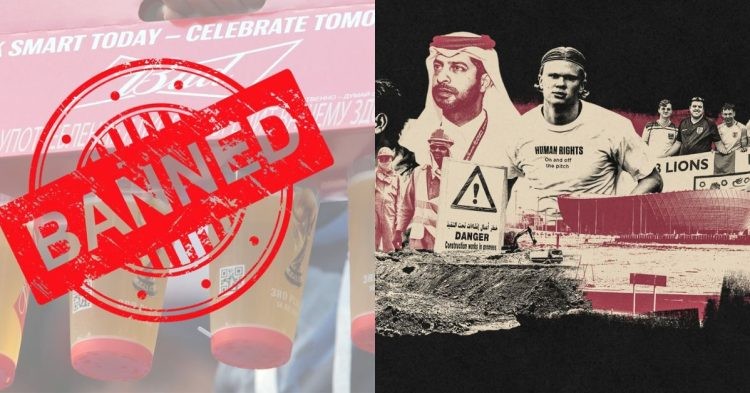 The Qatar World Cup is set to kick off tomorrow with Qatar taking on Ecuador in the opener. The World Cup has had its controversy ever since it was awarded to the middle-eastern country. Unfortunately for the protestors of the World Cup, their mass objections came too late. The World Cup begins tomorrow and will finish on 18th December. Qatar has put in place a lot of controversial laws. Some topics that have become controversial are the beer ban, clothing ban, LGBTQ laws, and the treatment of migrant workers.

According to a Guardian Report, 37500 workers died in building the World Cup stadiums. The country categorically denied this and said only 37 deaths took place during this time. It also said that only three deaths were construction work related.

Here are some of the rules you should follow if you are traveling to Qatar.

Beer is banned at soccer stadiums in Qatar

Beer was set to be sold around the perimeter of the stadiums before the matches were scheduled to begin. Fans were never allowed to drink inside the stadiums, as this was against the laws, rules, and traditions of the host country. But in a u-turn decision, Qatar has now banned the sale of alcohol around the World Cup stadiums completely.

Alcohol will not be sold inside or around the perimeter of stadiums at the 2022 Qatar World Cup.pic.twitter.com/etougl39HO

A statement read, “Following discussions between host country authorities and FIFA, a decision has been made to focus the sale of alcoholic beverages on the FIFA Fan Festival, other fan destinations, and licensed venues.” This means they have stopped the sale of alcohol around the stadiums in Qatar. This comes as a shock, especially to FIFA’s World Cup sponsors Budweiser. They were the only licensed authority to sell alcohol around the World Cup stadiums’ perimeter.

Clothing ban, LGBTQ+ laws, and other regulations you need to follow in Qatar during the World Cup

Female fans traveling to Qatar “Need to cover their shoulders and knees” when they visit public places in the country, like museums or government buildings. This however does not apply to stadiums. A senior researcher at Human Rights Watch, Rothna Begum has said, “There isn’t anyone is going to go around arresting you for this because there isn’t an official dress code. There isn’t a compulsory dress code and you can’t get sanctioned for it. It’s just a social restriction, a social tradition.”

WATCH: Private security guards in Qatar forced a Danish reporter off the air as he reported live from the World Cup ⬇️ pic.twitter.com/tUV1y8CmHI

The word public place in this situation, therefore, is up for interpretation, as was seen in the Danish reporters’ coverage. All homosexual acts are illegal in Qatar, and their punishment goes from fines all the way up to death penalties. Qatar has said over and over again it welcomes everyone to their country. But an official has also said they would not be changing their laws on homosexuality and asked the fans traveling to the country to respect their tradition.

Other materials that cannot be brought into the country, are pork products, religious books, e-cigarettes, liquids, and other similar products. There have been many controversial decisions leading to this World Cup being hosted in Qatar. Sepp Blatter himself admitted it was the wrong decision to have the World Cup in Qatar. The Swiss ex-president of FIFA is serving a suspension from football until 2027.