“You Have the Courage to Ask That…”: Real Madrid Manager Carlo Ancelotti Fuming Over Kylian Mbappe Question 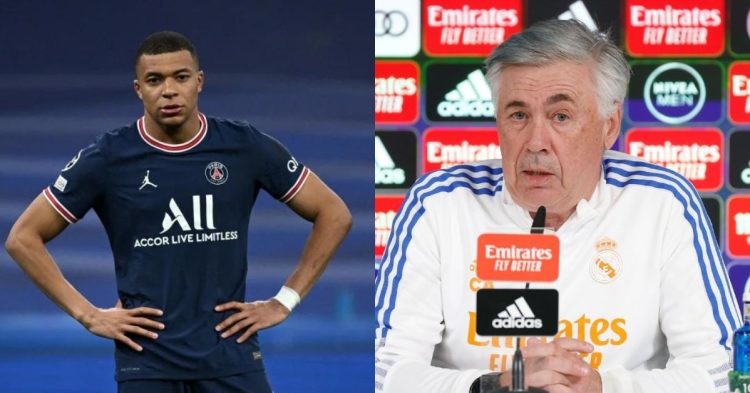 Kylian Mbappe is one of the best footballers on the pitch in the world at the moment. Off the pitch although, his reputation seems to be falling. Ever since the end of this summer window, there has been news regarding the Frenchman.

Reports emerged last week that Mbappe was unhappy with his situation at PSG for many reasons. One of them was that he was unhappy with the position he occupied in PSG’s attack. He had apparently handed in a transfer request for January. Speaking to the media, Real Madrid‘s manager Carlo Ancelotti addressed these rumours.

Ever since his rejection of Real Madrid and decision to stay at PSG, there have been many rumours surrounding Mbappe. Rumours had emerged linking him to a potential move to the Spanish capital, to which the Real’s manager reacted. Speaking to Canal+ Ancelotti said, “You have the courage to ask that. I do not answer. I am not obliged to answer.”

Whether Mbappe will be a good fit at Real Madrid is also a big question. He seems very unhappy playing as a pivot man for PSG, as seen in their 0-0 draw against Reims last week. Even if he was comfortable with the position, he would definitely not start ahead of Karim Benzema. Benzema is arguably the best striker in the world at the moment and a favourite in next week’s Ballon d’Or.

On the left wing in his preferred position, he would have tough competition against Vinicius Jr. He is definitely in the form of his life. It is also more than likely that he would not be happy and struggle to play on the right wing, where Real have a multitude of options as well. So even if a move to Real materialised, it is tough to see where he would fit in, although a player of his potential will surely find a way.

Fans react to the Mbappe situation

Experts and fans alike have been disappointed with Mbappe’s actions at PSG.

Is Mbappe’s ego out of control? 😳 pic.twitter.com/Yj1vESmguf

Fans also feel his actions at PSG have seen no consequence and have questioned the club’s hierarchy.

Would’ve loved to see Mbappe go to war with someone like Sir Alex, Ancelotti or Wenger. Would’ve been slinged out the back door. Spoilt brats on life changing salaries throwing their dummies out the pram. You made your bed now lay in it.

There have been many trolls surrounding the whole saga as well.

Even PSG’s football advisor Luis Campos had updates on the situation, along with manager Christophe Galtier.

Luis Campos: “I speak to Kylian Mbappé every day and he has never told me that he wants to leave the club in January”, tells RMC Sport. 🚨🔴🔵 #PSG

“I didn’t have the chance to speak with Kylian about this story”, PSG manager Galtier said after the game. pic.twitter.com/NTffpwFvLt

Mbappe will in all probability stay at PSG this summer because of the huge €300 million price tag. Not many clubs want him at the moment either, with his ego being a huge part of the decision. Post this summer and the next, when his price is in an affordable range, we will see if clubs are willing to take on that risk to battle his ego and utilise a world-class footballer.