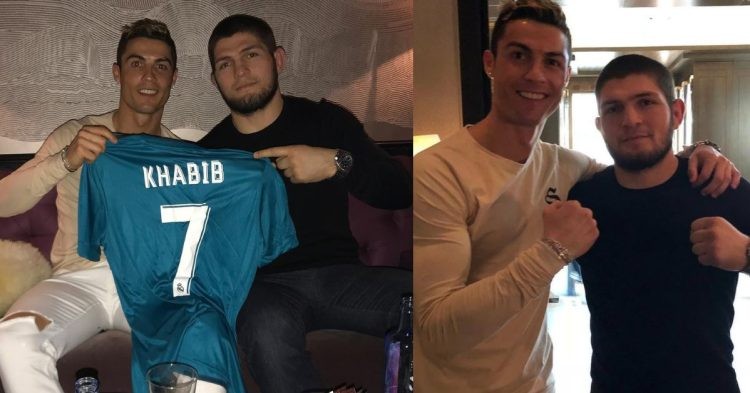 Cristiano Ronaldo is one of the most influential and successful athletes the world has ever witnessed. Being so successful and influential, Cristiano Ronaldo has very good relationships with top athletes from different sports as well. Renowned UFC champ Khabib Nurmagomedov is a sparkling example of such an athlete, who shares a very good friendship with the Portuguese superstar.

Although Cristiano Ronaldo isn’t a very secretive person, we are almost pretty much aware of his personal life. However, the Portuguese never really talks about his religion or involves in anything related to religion publicly. Khabib Nurmagomedov was once asked about Ronaldo’s religion and he answered the question very intelligently.

Khabib was asked if he has ever talked to Ronaldo about converting his religion to Islam. He said that they both have an understanding of the religions they follow. He also said that whenever Ronaldo meets him, he greets Khabib with ‘inshallah’, and ‘assalamwalaikum’. Khabib added, “When I meet people I don’t ask them what religion you are because this is not a good example for being Muslim,” which brought a big cheer from the crowd.

What is Cristiano Ronaldo’s religion?

Although Cristiano Ronaldo has never talked about his religious faith publicly, it’s a seemingly easy task to figure it out. Cristiano Ronaldo was born in Funchal, Maderia in Portugal. He was the youngest of three children of Jose Aveiro and Dolores Aveiro.

Ronaldo’s families, the Aveiros are Christian Catholics, just like the majority of Madeira. Cristiano Ronaldo once gave a slight hint about his religious beliefs in an interview with the Mirror. He said, “I want to keep him from being spoilt with luxuries. He will be taught values and religious values,” talking about his son, Cristiano Ronaldo Junior.

How did Cristiano Ronaldo and Khabib Nurmagomedov become friends?

Khabib Nurmagomedov’s love for soccer isn’t a secret. He has spoken about his desire to be a soccer player and play professionally. Khabib is a big Real Madrid fan and supports the Spanish giants. Other than that he supports Spartak Moscow and even signed a contract with a semi-professional Russian club.

Khabib and Cristiano became friends during the Portuguese’s Real Madrid days. Cristiano Ronaldo first followed Khabib on Instagram and that is the instance that started their friendship. Khabib followed Ronaldo back and they exchanged a few messages.

Things developed quickly between the iconic duos when Ronaldo invited Khabib in February 2018 to watch him play. They were also seen holding a Real Madrid shirt with the number 7 on its back with ‘Khabib’ written on it. They are still very good friends after all these years and have respect for each other’s profession and faith respectively.