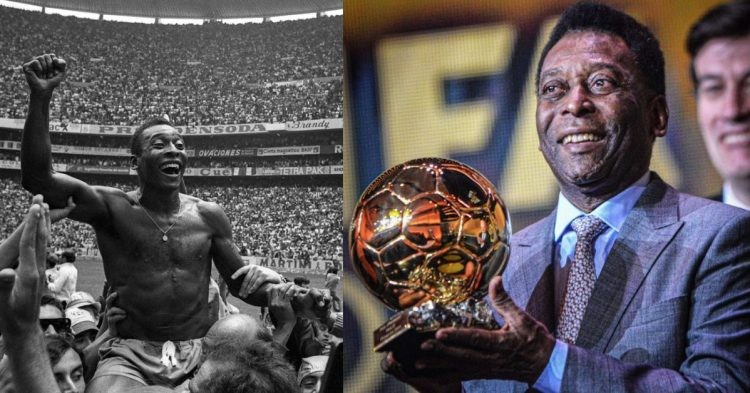 Everyone in the world of soccer and beyond knows and recognizes the name, Pelé. It had become common parlance long ago to refer to the late Edson Arantes as “Pelé.” The Brazilian soccer legend has been lovingly remembered by his nickname. His name, Edson, hardly ever comes up in the mention of the three-time World Cup winner.

What does Pelé mean, and what was his real name?

The Brazilian legend has, over the years, been called names other than his own. It has been reported that when he was in school, Edson played as a goalkeeper for a while. The saves that he made while guarding the goal, earned him the nickname “Bile.” after the Brazilian goalkeeper who played with his father. Over time, it was pronounced differently, until eventually, it evolved into “Pelé.”

Pelé is also oftentimes called “O Rei,” a nickname he earned after he won his first World Cup with Brazil.

In his autobiography, the late Pelé explained the confusion surrounding his name. “Shortly before I came along, there was another arrival: Electricity. To celebrate this great improvement in our daily lives, Dondinho named me Edson, a tribute to Thomas Edison, the inventor of the light bulb,” Pelé explained.

“In fact on my birth certificate, I am called Edison with an ‘i’, a mistake that persists to this day. I’m Edson with no ‘i,’ but to my eternal annoyance quite often the ‘i’ appears on official or personal documents, and time after time I have to explain why.” Pelé explained that to honor Thomas Edison, he was named Edson. However, somehow, he was called “Edison” instead of “Edson.”

Why does Pelé have two different birth dates?

It’s hard to imagine that a personality as celebrated as Pelé has not one but two of his personal details wrong on official documents. In addition to the confusion surrounding his name, the 82-year-old also shed some light on why he has different birth dates.

“As if my name wasn’t confusing enough, they got the date wrong on my birth certificate as well. It says 21st October and I’m not sure how this came about. Probably because we’re not so fussy about accuracy in Brazil. When I took out my first passport, the date was put in as 21st October. Each time I have renewed it, the date has remained the same,” The former Santos player said.

Pelé’s real birth date, by contrast, is reported to be October 23, 1940. O Rei has expressed his “annoyance” at the confusion regarding his name and birth date. Per Marca, he also once revealed that he found out much later that he discovered that “Pelé” actually means “Miracle” in Hebrew.