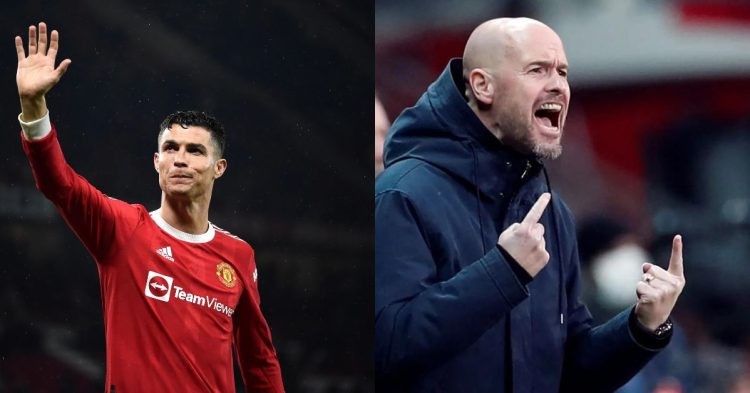 Cristiano Ronaldo and Erik ten Hag (Credits: The Sun and The Guardian)

Cristiano Ronaldo has given an explosive interview with Piers Morgan. The interview can be seen as one similar to the one Romelu Lukaku gave regarding Thomas Tuchel. The difference is Ronaldo is a much, much bigger player, and most of what he has said makes sense. The similarity is both players have been left out of the playing 11 for poor performances and are unhappy with the manager.

“Since Sir Alex Ferguson left I saw no evolution in the club, the progress was zero.”

Manchester United fans do agree with Ronaldo’s criticism of the way the owners have run the club. What many disagree with is disrespecting Erik ten Hag, Ralf Rangnick, and Wayne Rooney. If he feels Erik ten Hag has disrespected him, it could only be at the start of the season. Following his suspension at Chelsea, he has been a regular starter and even captained the side.

There seems to be no way Ronaldo can play for United again. He has already been fined $1.1 million by the club. Erik ten Hag has been said to be absolutely furious with Ronaldo’s interview. The timing of his interview just after Garnacho’s last-minute winner has not gone down well with fans either. They feel Ronaldo has stolen the headlines away from the youngster.

On the other hand, maybe Ronaldo respected United by releasing the interview after all their matches were over, to avoid distractions. He also released it before the World Cup, so this news dominates headlines. Sky Sports reporter Kaveh Solhekol said some feel it is cowardice from Ronaldo, as there is no Premier League or manager press conferences, until Boxing Day after Christmas.

Getting a lot of United fans asking if Ronaldo talks about the Glazers in our interview. He does, and you’ll find out what he says about them tonight. pic.twitter.com/wW03NPl4DY

The interview is 90 minutes long and will be released over two days. That just shows how explosive the interview is going to be. Ronaldo has already mentioned Erik ten Hag and Ralf Rangnick by name, and we have seen only small snippets of the interview.

What’s next for Ronaldo after the World Cup?

Cristiano Ronaldo will now make his way to Qatar to play for Portugal. Ex-players interviews regarding the incident indicate that despite what Ronaldo has said, he is not in breach of contract. This means United cannot terminate Ronaldo’s contract without paying him what he is owed until his contract expires in the summer.

It amazes me how many people don’t realise this is Ronaldo’s Goodbye Interview. Fallout with Ten Hag, the shambles the way the club is run, his love for the fans. He knows it’s over and is clearly going out on his terms. It’s over

1st, 2023. If Ronaldo has a very good World Cup, many clubs would form a line for his services. If he continues his current form, it seems hard to see which club would want him at the moment. Since Ronaldo has already given this explosive interview, he must know it is the end for him at the club. It would not have been a very smart decision to release this if he has not already found a destination for himself after the World Cup.

Chelsea, Napoli, and Roma are some clubs in Europe that have been mentioned as interested parties for Ronaldo. Meanwhile, MLS clubs like Inter Miami have always been interested in bringing superstars from Europe.