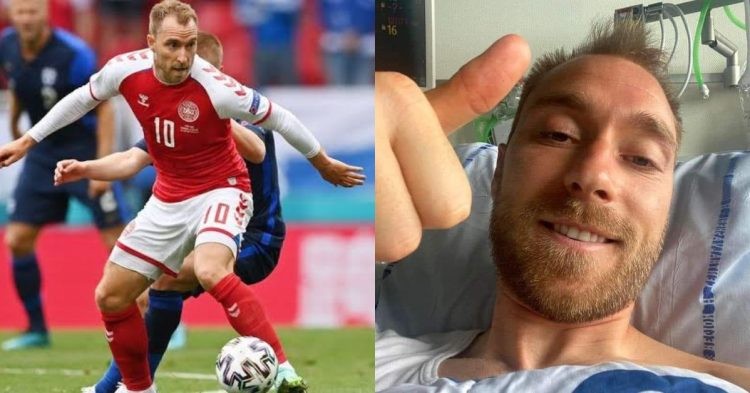 Christian Eriksen suffered a heart attack during a match against Finland in the Euros 2020 (Credits: The Mirror)

Christian Eriksen collapsed on the ground in the 42nd minute of the game against Finland in the UEFA Euro Cup 2020, much to the surprise of everyone inside Parken Stadium. Players from his squad rushed around him as he received on-field medical assistance.

With the game rescheduled for later that evening, Eriksen appeared to be well as he was led off the field, with it later revealed that the fast actions of those paramedics inside the stadium eventually saved his life.

Christian Eriksen received CPR on the field after collapsing

Christian Eriksen has been released from the hospital after suffering a heart arrest during Denmark’s Euro 2020 match against Finland. Denmark’s midfielder fell during the game and had to be resuscitated on the field. Eriksen recovered consciousness before being transferred to the hospital, where specialists are still trying to figure out what caused his cardiac arrest.

All thoughts and prayers with Christian Eriksen 🙏 pic.twitter.com/4SlWNZ6fVS

Eriksen was later discharged from Denmark’s Rigshospitalet hospital after being fitted with a heart starter. Eriksen had a good operation and was eventually discharged. Denmark’s captain, Simon Kjaer, arrived first and appeared to clear Eriksen’s airways. The seriousness of the tragedy was obvious, and players from both teams urged the medical personnel to move quickly.

Eriksen’s worried teammates created a protective ring around him while he was revived, providing some privacy for the 15,200 people in attendance and the millions watching on television.

Where is Christian Eriksen now?

With other footballers, including national teammate Daley Blind, having been fitted with the same device as Eriksen, Inter Milan canceled his contract two months after the incident in Copenhagen. Following his release, he continued individual training at his previous youth club Odense Boldklub before signing a six-month contract with the newly promoted Brentford in January 2022.

Eriksen thus joined freshly promoted Brentford in the English Premier League in the January transfer window of 2022, making his football comeback in February. The former Tottenham Hotspur man was in fine form in the Premier League, scoring once and registering four assists for the Bees, who finished 13th in their inaugural season in the top division.

He joined Manchester United in the summer of 2022 after making a few appearances for the club. Eriksen has been back to his best since the start of this season, becoming the deep-lying creative midfielder United had been trying to sign for years.

With attention circling Eriksen, he signed a three-year contract with Manchester United this summer and has since become one of ten Hag’s most-used players this season.