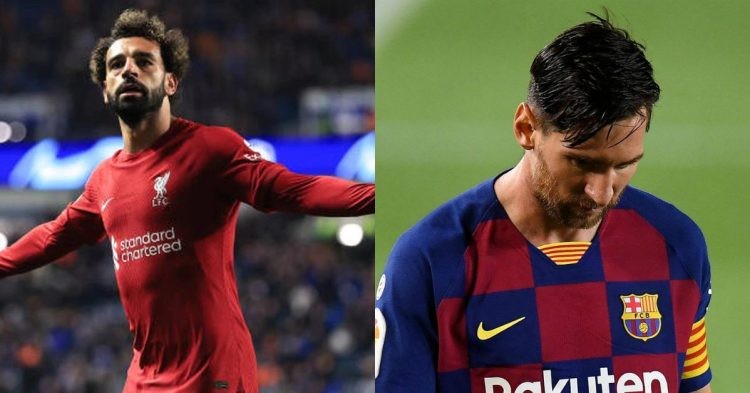 Mohamed Salah and Lionel Messi (Credits : AS USA and GOAL)

The feat saw him overtake the likes of superstars like Robert Lewandowski and Cristiano Ronaldo. The list has seen many star players like Raheem Sterling as well. Shockingly, this list does not include PSG and Argentina forward, Lionel Messi.

Soccer players with the same achievement as Mohamed Salah

Mohamed Salah scored in the 75th, 80th, and 81st minute, with all assists being credited to Diogo Jota. There have been many other players who have achieved quick hattricks in the competition.

Bafetambi Gomes has the second fastest hattrick in the competition, in 8 minutes. Lyon went on to win the match 7-1 against Dinamo Zagreb. Gomis went on to score 4 goals in the match as well. This achievement was all the way from the 2011/12 season when Kovacic was still at Zagreb.

Mike Newell scored a 9 minute hattrick against Rosenborg in 1995/96. A recent one was against Atalanta, scored by Raheem Sterling in a 5-1 win for Manchester City. Sterling achieved the feat in just 11 minutes.

Portuguese legend Cristiano Ronaldo appears on yet another outstanding stat. The Portuguese has also scored an 11-minute hattrick. The ex-Real Madrid man scored in Madrid’s 8-0 demolition of Swedish side Malmo in 2015. Robert Lewandowski joins Sterling and Ronaldo on the 11-minute mark, scoring in Bayern’s 7-1 win over Salzburg in 2022.

In the Premier League, Sadio Mane holds the record for the fastest hat trick. He scored in Southampton’s 6-1 win over Aston Villa in just 2 minutes and 56 seconds.

The fastest ever Hattrick in premier league history SM10

There is no conclusive list for La Liga’s quickest hattrick. Despite this many fans credit it to Atletico Madrid’s Kevin Gameiro. This was against Gijon in just 4 minutes and 43 seconds, in a 4-1 win for the Spanish giants.

In the Italian Serie A, the record belongs to Keita Balde. It took the Senagalese forward 5 minutes to score 3 against Palermo for Lazio. The team went on to win the match 5-0.

In Germany, the record unsurprisingly belongs yet again to Robert Lewandowski. He achieved the feat in just 3 minutes and 22 seconds. He scored 3 in Bayern’s 5-1 win over Wolfsburg at the Allianz Arena.

In Ligue 1, the record surprisingly doesn’t belong to a PSG player. It belongs to Matt Moussilou, who scored 3 in 4 minutes in Lille’s 8-0 win over Istres in 2005.

Lionel Messi and Cristiano Ronaldo hold the record for the most hattricks in the world. While Ronaldo appears just once, Messi fails to appear on the list altogether.