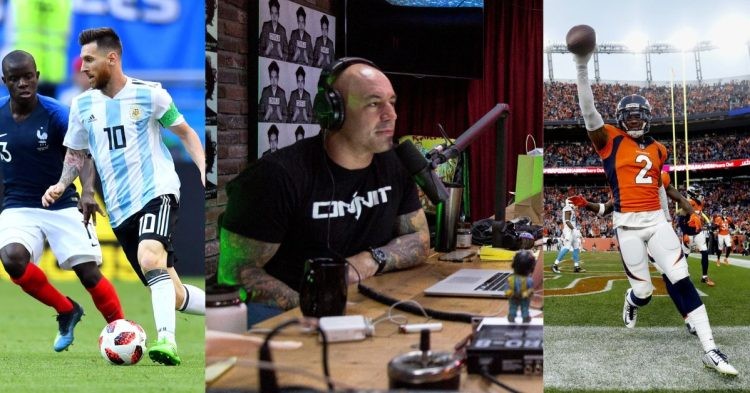 Joe Rogan, a UFC commentator, and podcaster, among other things, has claimed that soccer is more dangerous than NFL. He believes that soccer players suffer more heart attacks while playing than NFL players. It makes the sport more difficult.

In a podcast called “The Joe Rogan Experience”, Rogan explained the physical limits soccer players push themselves to with the help of Dr. Bret Weinstein. Weinstein, who is an evolutionary biologist, said, “in a brief look this morning I found that nobody has died on a football field in the NFL in 50 years.”

He explained that the statistic might be wrong but it is still a very rare event. He referred to Buffalo Bills player Damar Hamlin’s cardiac arrest during a match.

Damar Hamlin took to Instagram for the first time since his cardiac arrest on Monday ❤️💙#ForDamar pic.twitter.com/hrkDeOpX9x

On the other hand, in soccer, a player collapsing due to cardiac arrest is a regularly occurring event. Rogan said, “I know they’ve had heart attacks of playing soccer before people have had that.”

He explains further, “soccer is a particularly uh difficult sport in terms of your cardiovascular function. Those guys are in insane shape because you have to be. The amount of strength, they’re sprinting.”

He went on to tell a story about when he went to watch a soccer match live in Austin. He said he was extremely impressed with the shape soccer players keep themselves in.

“I was first of all impressed but these guys have thoroughbred legs. I mean they are in insane shape and just the demand, as a person who works out, watching the demand that’s required to the body to be able to perform that way, sprinting constantly.”

The American podcaster was all praise for how soccer players maintained themselves. He believes it is physically more demanding than the NFL and has lesser breaks.

Joe Rogan explains why soccer is not good for American television

Along with the help of Dr. Weinstein, Rogan also explains how soccer is not the best sport for broadcasting. They make the point that the sport does not have breaks where you could show advertisements at regular intervals. Unlike many other sports.

He talks about how his friend Eddie, who is an owner of a local soccer team, explained to him about the breaks issue. Rogan said, “he [Eddie] was explaining to me that one of the reasons why it’s not good for television in America is because they don’t take breaks.”

“It’s not like you know you have a stop “we’ll be right back” with you know [in NFL] ‘first down and we’ll be back with commercials’ and you can you know [advertise] Pizza Hut and all that,” he added.

Advertisements and commercials are the ways to fund your broadcasting. But with soccer, it gets difficult because it goes on for a continuous period.