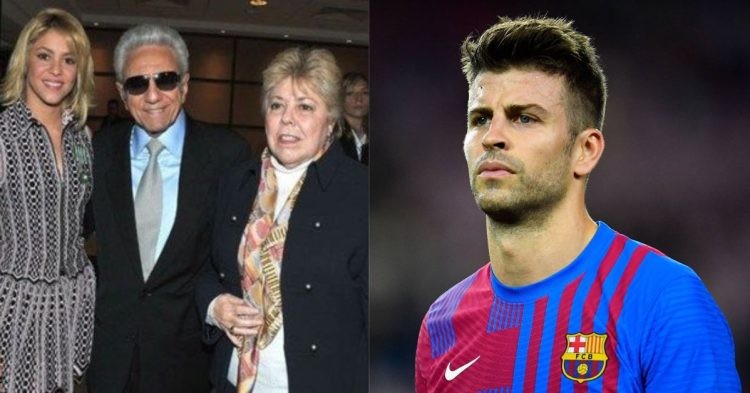 Gerard Pique, Shakira and her parents (Credits: Pinterest and The Japan Times)

Shakira and Gerard Pique dated for 11 years before announcing their split. The two superstars’ families would have gotten to know each other. Shakira’s family, especially her mother, Nidia del Carmen Ripoll, still considers Pique a part of their family. These comments could potentially have upset Shakira.

The Colombian’s mother was speaking to the media where she told them Pique is still a part of their family. Both the parties’ dating lives have become hugely public news. Shakira has reportedly agreed to meet her long-time ex-boyfriend Antonio de la Rua, while Pique is dating 23-year-old Clara Chia Marti.

Why does Shakira’s mother still consider Gerard Pique a part of the family?

Shakira’s father, William Mebarak has been hospitalized in Barcelona. Despite not being in a relationship with Shakira anymore, Pique enquired about his father-in-law’s health. The 91-year-old was admitted to the hospital due to poor health, but nothing more has been revealed. Pique has also visited the hospital to check in on Shakira’s father, a gesture that has not gone unnoticed by the Colombian singer’s mother.

On being asked about Pique’s involvement in family matters, Shakira’s mother said, “Of course, yes, we are still family.” Even Shakira has been seen visiting her father daily at the hospital to remain on top of the situation. Shakira’s 91-year-old father is now in stable condition.

Despite their breakup, Shakira’s mother considers Pique an integral part of their family. While Pique’s gestures may have impressed her mother, Shakira might not be as thrilled to see Pique as involved as he is at the moment.

Pique and Shakira in the public eye following their breakup

News regarding Gerard Pique already being in a relationship has been very public. Many have been unimpressed by the Barcelona defender’s actions. He has reportedly started dating Clara Chia Marti, a 23-year-old PR student, who worked at his company, Kosmos.

Reports have also indicated that Shakira has now agreed to meet her ex-boyfriend Antonio de la Rua. The Argentine lawyer had made contact with Shakira, promising to do all he could to help the singer during this difficult time for her. Shakira could end up facing two court cases this year. While a tax-fraud case is already underway, Pique could take their children’s custody matter to court.