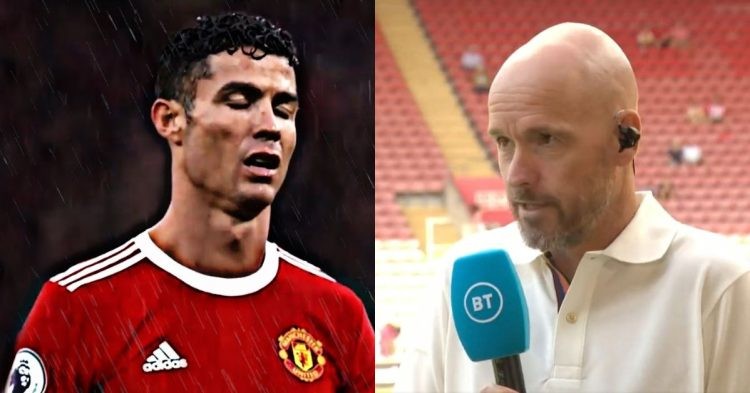 Cristiano Ronaldo has had a terrible start to this season. The Portuguese was adamant about leaving Manchester in the summer but was refused by United’s owners. Even Erik ten Hag wanted the talismanic striker to leave. As the season has gone on Ronaldo has scored just 3 goals.

Make this viral. Cristiano Ronaldo is truly finished. He should follow Pique and retire. Shameless.

On the other hand, the Portuguese has made 7 fouls, more than his 6 shots on target. The World Cup cannot come fast enough for Ronaldo at the moment. He had another quiet performance against Aston Villa in United’s 3-1 defeat.

How many goals has Cristiano Ronaldo scored this season?

Cristiano Ronaldo has scored just 3 goals so far this season. Two have come in the Europa League and just one in the Premier League. The first goal was a penalty against Sheriff Tiraspol in the 39th minute. His second goal was again against Sheriff in the 81st minute.

His other goal was in the Premier League against Everton. Ronaldo scored the winning goal for United in the 44th minute. Ronaldo’s season has not been the greatest. His team’s performances on the other hand seem to be on the way up. Whenever Ronaldo plays, Manchester United‘s performances tend to dip.

Ronaldo is having the worst season of his career without any doubts..👀 pic.twitter.com/N1nnwpKGKC

It’s not entirely Ronaldo’s fault. When he plays, United seems to look to pass just to the Portuguese. According to manager Erik ten Hag, these passes lack accuracy and are not the right passes to play either.

Ten Hag was doing well. He benched Penaldo. Rashford was thriving. The team working as a unit. Then he starts Penaldo, even made him Captain. Rashford is going back to the Rashford of last year and this is Penaldo’s only contribution in the match today 👇🏽🙄🙄🙄 pic.twitter.com/Zdcn87MO5n

The manager was asked about these passes, and said, “No, I think it was stupid to do that. We delivered too quickly crosses in from too far and too forcing. Then, we don’t help him. We have to bring in the crosses at the right moment.”

What is the longest Ronaldo has gone without scoring?

At the start of his career, Ronaldo was not the most prolific of goal scorers. His current drought of going without scoring is for 6 games (Europa League included). According to GOAL, Cristiano’s last longest goal-scoring drought was 7 games in the 2008-09 season with United.

The service Ronaldo has received as a striker for Manchester United has not been very good. But the Portuguese is not blameless in his poor scoring form. His speed and agility seem to have suffered over the past year. He has also been a frustrated figure on the pitch, which was well-seen in last night’s match. He was given a yellow card for his tussle with Aston Villa defender Tyrone Mings.

His performances in the World Cup will be very interesting to watch. His future may well be decided following the World Cup when the January transfer window opens.