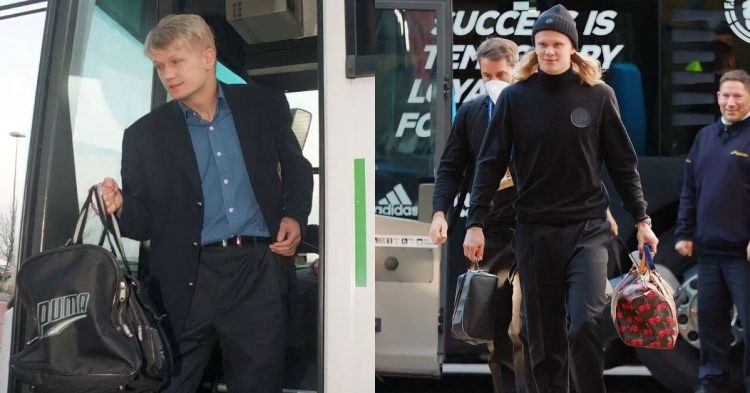 Erling Haaland is one of the most talked about soccer players in 2022. His physicality and crisp finishing have left many fans in awe. He currently plays for Manchester City where his father, Alfie Haaland, also played. This story is not about Erling but the mastermind behind him.

Alfie Haaland was born on November 23, 1972, in Stavanger, Norway. He played as a defensive midfielder for Leeds United, Nottingham Forest, and Manchester City. Unfortunately, he suffered a career-ending injury in 2001.

Why did Alfie Haaland retire?

It is speculated that Alfie had to retire due to a devastating knee injury. Roy Keane’s tackle on Alfie in 2001 is considered one of the worst challenges in Premier League history.

During an FA Premiership game at Old Trafford, the former Manchester United skipper tackled the City midfielder causing an injury to his left knee. It is said that Keane’s move was an act of vengeance for a previous Alfie Haaland tackle in 1997. Keane, however, denied this claim.

Roy Keane said, “I’d played against Haaland three or four times between the game against Leeds, in 1997, when I injured my cruciate, and the game when I tackled him, in 2001, when he was playing for Manchester City. If I’d been this madman out for revenge, why would I have waited years for an opportunity to injure him?”

Alfie had to go eight years without playing football. Alfie’s Man City career ended with Keane’s tackle. However, he tried to recover from the injury by going through knee surgery. He came back in 2011, played one game for Bryne FK3, and moved to Roseland Ballklub. Unfortunately, he had to retire as he had to go through surgery again on his right knee. Not his left knee which was injured in a tackle with Roy Keane.

Alfie Haaland never bought Keane’s justification. Instead, he believed “If you’re on the ground and someone hits you in the right leg, you can still twist your other leg. It can get injured, and that’s probably what happened. Obviously, I found out afterward that it was with intent, and he was seeking revenge and all these things. I think that’s a bit sad. Sad for football, and it was not good for me either at the time.”

How many goals did Alfie Haaland score?

The Norwegian couldn’t play much for Manchester City as he had to take a break after an injury to his knee.

Alfie started his career as a right-back in 1979 for Bryne. Eventually, he earned a promotion and made seventy-five appearances for Nottingham Forest. Alfie joined Leeds United in 1997 and scored eight goals in seventy-four league games. The Norwegian joined Manchester City in 2000, scoring three goals in 38 appearances for the club.

Who is Erling Haaland’s mother?

Alfie Haaland married Gry Marita Braut (ex-wife) and had three children with her. Astor, their eldest son, studies for a master’s degree in Finance at the BI Norwegian Business School. Meanwhile, Gabrielle Braut is married to Jan Gunnar Eide.

Their last child, Erling, as we all know, is a sensational football player who followed in his dad’s footsteps. He is in scintillating form for Manchester City this season, breaking every record that comes his way.