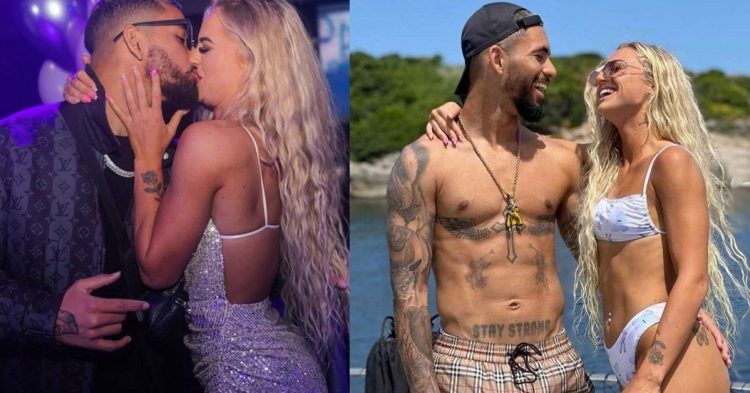 Douglas Luiz, the Brazilian who has been in the headlines recently, has signed a new contract extension with Aston Villa. After defending his girlfriend, Alisha Lehmann, publicly, he has been in the news for a long time.

Off the field, Luiz and Lehmann have been engaged in various battles, as Luiz condemned the Brazilian journalist for posting an improper video of his girlfriend’s celebration. But on the field, it was joyous for Douglas Luiz as he confirmed his stay at Villa Park till 2026.

The Gunners’ chances of signing the Brazilian midfielder have been dashed. Douglas Luiz has signed a new contract with Aston Villa.

After an average season and struggling with injuries, it wasn’t the best of the seasons for Douglas Luiz.
He has made 120 appearances for Aston Villa and nine caps for Brazil. He has scored seven goals and provided eight assists.

However, the Brazilian has signed a contract extension with Steven Gerrard’s side, Aston Villa. Arsenal were hoping to complete a deal before the transfer deadline. Villa rejected Arsenal’s second offer of $23 million to sign the Brazilian.

He has signed a new long-term deal which will run until 2026. The 24-year-old had entered the final year of his deal at Villa Park, after making a switch from Manchester City in 2019 for $15 million. The midfielder has since gone on to make more than 100 appearances for the side, becoming a key member of the squad.

Douglas Luiz had massive interest from Arsenal in the summer transfer window. The Villains rejected three bids from the gunners on deadline day.

Luiz shows gratitude to his club and fans

In an interview with Villa TV, he said, “This club has opened the door for me when I came to England to play in the Premier League. I love this club.”

Furthermore, he took to Instagram and wrote, “Good news. I’m so happy to stay here.”

His teammates Ezri Konsa, Tyrone Mings, and Emi Martinez were among those to respond to the Brazilian’s post in positive style. They reacted with a range of heart, applause, and flame emojis.

However, with the signing of the Frenchman, Boubacar Kamara, Luiz has to fight for his place to get back into the team. He had a pretty average last season, with just one goal and one assist in the Premier League. But his talent and skills aren’t to be overlooked.

The goal scored directly from the corner against Arsenal at the Emirates is a good example of what the Brazilian possesses and is capable of. The future of Brazilian football looks sorted with a new long-term deal. Luiz would love to be back in the first team and once again be the main talisman for his team, Aston Villa.