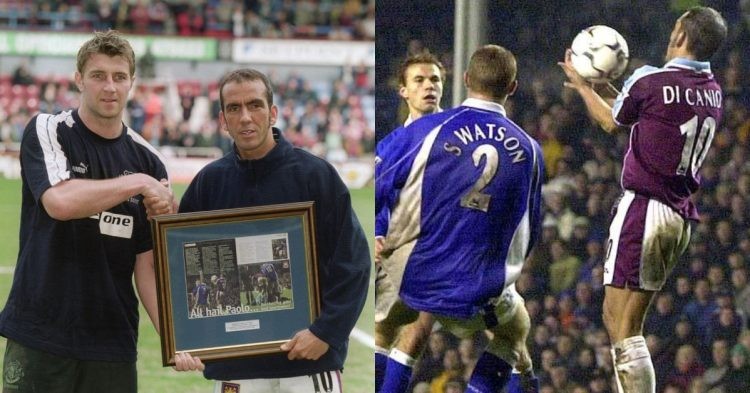 Paolo Di Canio after receiving the award from Paul Gerrard (right) and after stopping the play for him to receive treatment. (right) (credits: Twitter)

No matter how well Paolo Di Canio played on-field, his off-field shenanigans and tantrums in training made him quite a unique character. Besides West Ham, Paolo has played for clubs like Juventus, AC Milan, Celtic, Sheffield Wednesday, and Lazio.
He is one of those players that don’t come around often. No matter how bad his off-field behavior got, he made it up with moments of brilliance on-field. One such moment captured was when West ham hosted Everton for a Premier League match in 2000.

Why did Paolo Di Canio catch a ball mid-air against Everton?

With the score, all square at 1-1, both teams were pushing to find a late winner. West Ham found themselves in a favorable position to run away with the 3 points.

Paolo Di Canio burst into Everton’s penalty box, only to be stopped by Toofes goalkeeper Paul Gerrard, who attempted to sweep the ball away.

After being dispossessed, he ran back into the penalty area to receive a cross. With the ball floating in, instead of shooting or heading the ball, he caught the ball to stop the ongoing play.

Amused at his actions at first fans shouted loudly but quickly stood up to praise the Italian as he stopped the play for an injured Paul Gerrard to receive treatment.

Following the applause from Everton fans for his sportsmanship, Paolo Di Canio was awarded the FIFA Fair Play Award from Gerrard before their rematch at Goodison park in March 2001. But not everyone was happy with his actions. West Ham manager Harry Redknapp and teammate Stuart Pearce were furious.

In a conversation with talkSPORT in 2019, Redknapp revealed how furious he was at Di Canio. “My God, the day he caught the ball at Everton with five minutes to go and we needed the points badly, and instead of heading it in he catches the ball so Gerrard can get treatment.”

Di Canio’s career has been marred by controversies

Having proven himself as a worthy striker, Di Canio joined Sheffield Wednesday and established himself in English football. He pushed referee Paul Alcock after being sent off for his altercation with Arsenal’s Martin Keown during his time with the Owls.

Throwback to when Paolo Di Canio pushed over referee Paul Alcock after being sent off against Arsenal.pic.twitter.com/UzlYDVVJGQ

His confrontation with Frank Lampard for the penalty taker as well as his desire to be substituted in the match against Bradford City after three of his penalty appeals were denied, caused a stir at Upton Park.

The referee was thrown to the ground, and Di Canio was given an 11-match suspension and a $12,000 fine by the FA. This was his final game for the Owls before being sold to West Ham.

Di Canio rejuvenated himself at West Ham, helping the club to a fifth-place finish in the 98/99 season and gaining the fan’s support. His spat with teammate Frank Lampard and desire to be substituted in a match against Bradford City after three of his penalty appeals were turned down caused a stir at Upton Park.

West Ham United decided to release him and he signed for Charlton Athletic for free. The Italian scored four goals in his only season with them before he returned to Italy to play for Lazio.

His time at Lazio started well, with the fans excited about having a Lazio supporter leading the team’s attacking line. During his time at Lazio, he had been in constant trouble with the club and its board. His growing support of the Ultras and fascists thrashed his relationship with the board members.

After scoring for Lazio, Di Canio celebrated by making fascists salute. These incidents and the testimony of a few players and coaches were enough for Lazio to not renew his contract. He continued to play till 2008 having signed for Cisco Roma for free in Serie 2.