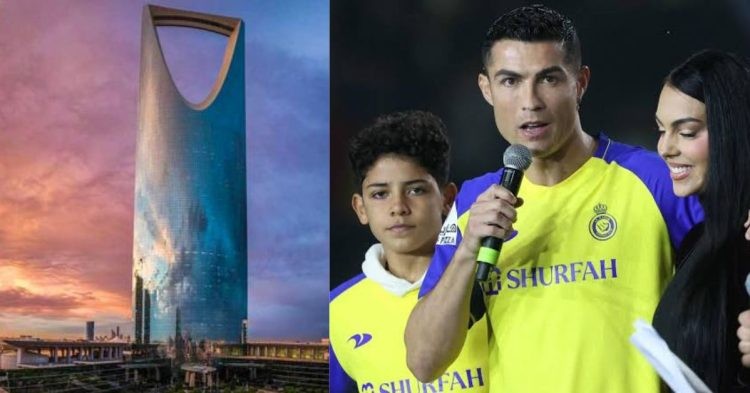 Cristiano Ronaldo's will live with his family and friends in Four Seasons Riyadh (Credit: Twitter)

Cristiano Ronaldo has completed a groundbreaking move to Saudi giants Al-Nassr in the most expensive deal in soccer history. The Portuguese great is a media magnet, wherever he goes, whatever he does, the media is always behind him. Similarly, every little detail about his Al-Nassr move, including his new posh hotel is attracting soccer fans.

Cristiano Ronaldo left Europe to leave his mark on Asian soccer. Al-Nassr made several announcements before Ronaldo’s arrival in the Saudi capital last week. Mrsool Park was jampacked in anticipation of the Portuguese forward’s unveiling. Ronaldo received a hero’s welcome from his new fans. His unveiling crossed 3 billion views all over the world, which surpasses the World Cup final by a billion.

What does Cristiano Ronaldo’s new luxurious Saudi hotel have to offer?

Cristiano Ronaldo is one of the richest athletes of all time. His net worth is around $500 million. The Portuguese leads a luxurious life and isn’t afraid to show his love for expensive cars and mansions to live in. During his time at Real Madrid, he lived in La Finca, which is considered the Beverly Hills of Spain.

Ronaldo’s latest deal in Al-Nassr will earn him an all-time highest salary of $214 million a year, which will keep him at the club till 2025. The Portuguese have booked the most expensive suite for his family in Saudi. He will stay in the Four Seasons Riyadh hotel which will cost him a massive $300,000 every month.

According to a report in Daily Mail is that Cristiano Ronaldo will live with his family, friends, staff, and his entourage across 17 rooms of the lavish suite. The property is situated inside the famous Kingdom Centre building. Ronaldo and his partner Georgina will live in a two-storied Kingdom Suite. The five-star hotel serves dishes from all around the world, specializing in Middle-Eastern cuisine.

They truly are rolling out the red carpet for the Portuguese star Cristiano Ronaldo!

Cristiano Ronaldo is living it up in his new home in Saudi Arabia, staying in a lavish suite at the Four Seasons hotel in Riyadh and racking up a bill of over £250,000 in just one month. pic.twitter.com/WlE3MZTFff

The hotel staff and guests have received stern instructions not to disturb the 5x Ballon d’Or winner or his family. The hotel authority has strictly instructed not to bother the starman for selfies or autographs. Four Seasons Riyadh will offer tennis courts, private pools, spas, and branded shopping stores for their proudest accommodation.

However, Cristiano Ronaldo won’t be living in the posh suit permanently. The Portuguese will look for a permanent home while staying at the hotel for his upcoming Saudi days. He will make his debut on 21st January against Ettifaq after completing a two-match ban.