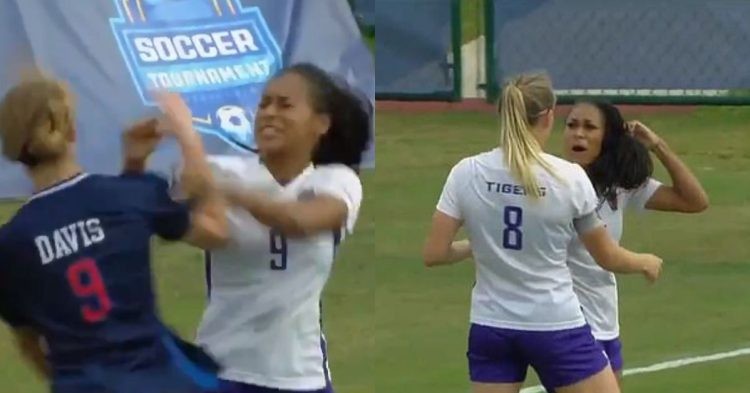 A brawl broke out in a women’s football match between Ole Miss and LSU. The two players came to blows before being separated by the referee and other teammates. The referee went on to issue red cards in the game. The brawl took place between Maya Gordon, Ramsey Davis, and Rammie Noel.

The game was tied 0-0 at the time before the result ended up in favor of Ole Miss. One of the players, Maya Gordon ended up crying out of anger, and her teammates and management were seen consoling her.

What happened during the match?

During the second half of extra time, the score was tied at 0-0. During a play along the sideline Maya Gordon, from LSU, and Ramsey Davis, from Ole Miss were trying to gain possession of the ball. Davis reportedly grabbed Gordon around the waist, leading Gordon to lose her temper.

The two were seen throwing punches at each other. The situation seemed to be de-escalating before Gordon’s teammate Rammie Noel rushed in, getting involved in the fray. She pulled and knocked Davis to the ground. The referee ended up sending off all three of the players. With LSU having two players sent off, and Ole Miss just one, they had one player over LSU and ended up winning the match.

Fans were unhappy with the brawling but said it was much better as compared to the Premier League.

They would’ve had 4 stretchers and 3 ambulances to take those guys off the pitch! It’s hard for me to watch solely for that reason.

There was also an argument between fans regarding who was to blame for the brawl.

You gotta learn to take a punch and walk-away, instead only Davis from Ole Miss was ejected and two players from LSU were ejected.

Fans argued both sides of the debate.

Pulled her hair too

Fans have said Ole Miss has a reputation when it comes to such issues on the pitch.

So, she turns away to stop fighting – and you still want to swing…looks like someone appeared to be inferior to the other. @OleMiss already has a bad rep when it comes to these issues…

They were shocked by such a brawl, which had never been seen before.

Never seen this before. Ugly scene at the SEC Tourney between Ole Miss and LSU.

It’s been a heated rivalry for a century, but this is stupid. pic.twitter.com/JtkADyEXoD

Such conduct is unacceptable, be it men’s or women’s football. The game ended up with Ole Miss progressing to the next round, while LSU was eliminated.