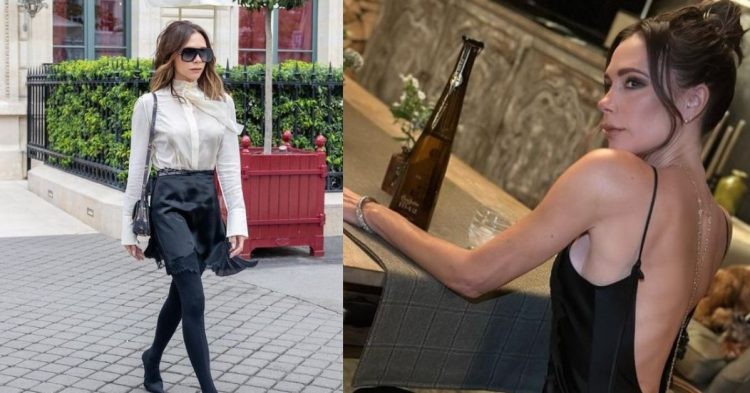 Victoria Beckham is recognized globally as a style and fashion icon. The 48-year-old has become a household name after rising to fame with her band, the Spice Girls. In addition to being a world-renowned singer, she is also a world-class fashion designer and a TV Personality. If that wasn’t enough, she is married to one of the biggest soccer stars of the 21st century, David Beckham.

The question of Victoria Beckham’s health regimen, however, often comes to mind. Fans and admirers are left wondering about the secret behind Posh Spice’s fitness even at 48. There have been multiple reports suggesting that Victoria has not changed her diet for 25 years. She follows what works for her. So here are a few facts about how the ‘Learning to Fly’ author maintains her shape.

What is Victoria Beckham’s weight?

While there are no tools to pinpoint her weight accurately in real-time, there have been many references to a certain interview. Right after giving birth to her first son, Brooklyn Beckham, Victoria went on to appear in a TV show in Australia. Recalling the incident from when she made an appearance on “TFI Friday”, she said: “The host asked me to weigh myself!”

The host said: “A lot of girls want to know because you look fantastic again, how did you get back to your shape after birth?” Victoria replied, “I haven’t done much. I’m actually quite lazy.” The host then pulled out a weighing scale from under his desk and asked encouraged her to take a step on it.

It was revealed during the course of this interview in 1999 that Victoria Beckham weighed 112 lbs. It has been reported that she has stuck to her diet for all these years. So it’s hard to imagine anything but minuscule changes in her weight over the years.

Is Victoria Beckham a vegan?

Star couple David Beckham and Victoria Beckham announced in 2020 that they intended to ditch meat products. First, Victoria announced on Instagram her decision to take the leap to a plant-based diet. Then, three weeks after that, the former AC Milan man also made a similar announcement on Instagram.

The former Spice Girl revealed that she follows a plant-based diet and takes vegan supplements daily.  Courgetti with mushrooms, aubergine with blue cheese, a mango and avocado entree, chickpea salad, veggie soup, smoked watermelon, and sweet potato have reportedly been on the menu since going meat-free.

Animal-based products and diet components have not been completely eliminated from their diet. But it is a potential step in the direction of veganism.

What does Victoria Beckham eat daily?

Victoria Beckham has revealed that she prefers two tablespoons of apple cider vinegar to tea or coffee in the morning. This is followed by a fresh lemon squeezed into a glass of boiling water. The fashion icon also revealed the Beckham family enjoys Ezikiel’s sprouted grain breakfast cereal. Aside from that, she blends apples, kiwis, lemon, spinach, broccoli, and chia seeds into a smoothie.

Victoria revealed to the Telegraph that she consumes three to four avocados every day for skin health. Moving on to lunch, she switches between avocado toast and seafood. This includes fresh fish, and according to a 2018 Instagram story shared by her, a tequila and lime-cooked serving of jumbo prawns.

For dinner, the mother of four opts for spicy prawn courgette mixed with vibrant vegetables for dinner instead of the more traditional spaghetti.

How many calories does Victoria Beckham consume?

Over the years, correspondents and reporters of many media houses have attempted to eat like the ex-Real Madrid star’s wife for a week. One such attempt was made by one of Manchester Evening News’s reporters in early 2022. At the end of the challenge, the reporter promptly revealed that she consumed 1300-1500 calories a day.

So, upon counting the calories, it seems that a major caloric deficit is maintained by Victoria on a daily basis to maintain her physique.

Does Victoria Beckham have a cheat day?

Victoria Beckham reportedly enjoys healthy seeds instead of finger food or preservative-soaked snacks. It was also revealed that she rarely ever breaks her discipline to eat anything other than her own diet. It’s hard to imagine that she has a cheat day at all. She does, however, have a (very disciplined) cheat meal.

In an appearance on the River Cafe’s Table 4 podcast a while ago, she revealed her cheat meal. ‘I like whole grain toast with salt on it. It’s that carby thing, isn’t it? It’s that carbohydrate that makes you feel comforted and I love salt. I’m a savory person as opposed to a sweet person,’ she said. ‘I’m a very fussy eater and I like things to be cooked in a very simple way. I don’t like oils or butter or sauces,’ she added.

It seems as though David Beckham’s better half treats her discipline like a religious place. She even went so far as to state that she hadn’t had red meat since she was seven. It appears that staying fit and looking the part isn’t nearly as simple as making a New Year’s Resolution. Discipline, as demonstrated by Victoria, plays a crucial role.