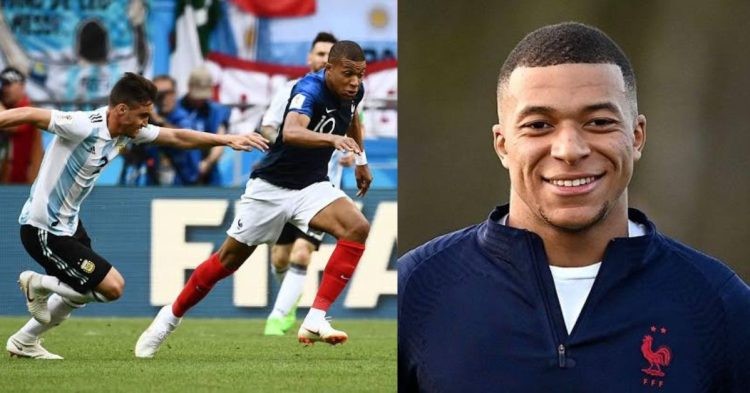 Kylian Mbappe is one of the most feared forwards at the moment. Although he is an intimidating menace for the opposition defenders to deal with, they can have little giggles with us about the PSG forward having one or two funny nicknames.

Kylian Mbappe has been the talk of the town for the past month or so. Thanks to his shenanigans on and off the pitch. He has had an incredible World Cup with the French national team. He scored 8 times across 7 matches in the competition to win the golden boot. Mbappe’s performance in the final against Argentina is one of the greatest the prestigious tournament has ever seen.

The final match was almost a battle between Mbappe and a fully motivated Argentine side. His PSG teammate Lionel Messi’s brace and Di Maria’s goal were canceled out by a terrific Mbappe hat trick. The match went into a penalty shootout with a 3-3 scoreline. Mbappe was let down by a lackluster French team, as Coman and Tchouameni missed their penalties to lose the match by a 4-2 scoreline.

Kylian Mbappe was equally active off the pitch to make headlines as well. Last summer he was seen with Ines Rau on Cannes beach, where Ines was in Mbappe’s arms. The transgender Playboy model Ines Rau had all the attention of the media as the PSG forward’s partner. However, after the World Cup heartbreak in Qatar, there were rumors about their breakup.

What is the story behind Kylian Mbappe’s nickname?

Kylian Mbappe is only 24, and already has a career to be longed for. The former Monaco wonderkid made his World Cup debut at 19 years of age in the 2018 World Cup. He was already an established first-team member of the French team following his $193 million move to PSG from Monaco. He scored 4 goals in the tournament and won the Young Player of the Tournament award.

The PSG forward scored 2 goals in a thrilling round of 16 encounter against Argentina in a 4-3 France win. However, his talismanic moment wasn’t the brace he scored; it is the run he made in the 11th minute of the match. Mbappe took the ball in his own half and went past Tagliafico and Mascherano in a blink of an eye. Next up, he took on Marcus Rojo and beat him as well, only to be brought down by him and earned a penalty for that.

The run was mesmerizing, to say the least. He reached a record speed of 23 miles per hour. According to a Marca report, his French teammate Florian Thauvin said that he has a new nickname ‘37’. The reason behind it was his run. If we convert miles to kilometers, the 23 miles/hour speed will be a 37 kilometers/hour speed.

Although when Antoine Griezman was asked he said, “I prefer to call him Kiki.” He also added, “I know he does not like it but he’s stuck with that name,” jokingly. Besides ‘Kiki’, Mbappe’s PSG teammates call him ‘Donatello’, a character of the Teenage Mutant Ninja Turtles. “He looks a bit like a turtle,” according to his club and France teammate Presnel Kimpembe when he was asked about his teammate’s funny nickname.