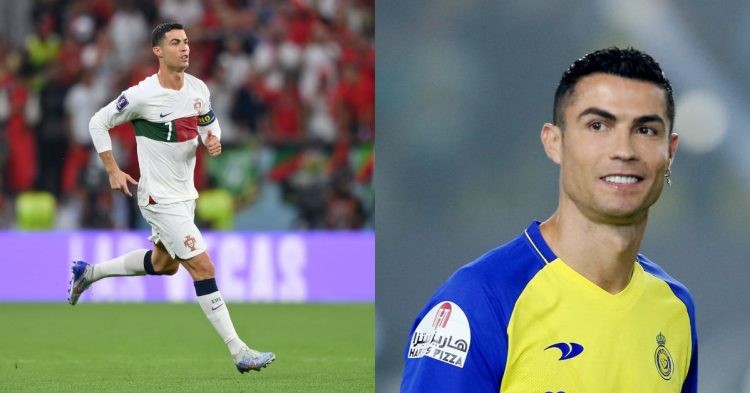 Cristiano Ronaldo is one of the greatest soccer players of all time. A career filled with trophies, medals, and individual records. The superstar has a global fanbase and is admired by people who don’t even follow soccer. Despite such high accolades and standards, Ronaldo has always been a person who is on the radar of the media for the purpose to be criticized.

Ronaldo’s last few months have been filled with conflicts and controversies. Starting from Piers Morgan’s interview to a disappointing World Cup to finally joining Al-Nassr. Every decision and activity of the Portuguese has allowed the media to create news based on him.

Ronaldo has always been in some sort of tussle with the media and fans. He had to face a 2-match ban for smashing an Everton fan’s mobile after a defeat last season with Manchester United. During Euro 2016, Ronaldo threw a reporter’s mic into the pond when he approached Ronaldo during the team’s leisure time. The Portuguese striker has even posted in the past that the media aims to lie about him in order to get fans’ attention.

Cristiano Ronaldo isn’t having the rumours about his future 🙅‍♂️

He replied to a social media account that suggested he was “adamant about leaving” Man Utd 👀#BBCFootball #MUFC pic.twitter.com/pWEHfE9vQE

Ronaldo admitted that it’s difficult to handle the criticism he receives from the media and people. In his 2015 documentary movie, ‘Ronaldo’, he stated “I have everything. There’s nothing that I don’t have but people are always waiting for me to make a mistake, to accuse me… to criticize me. It’s difficult. It’s very difficult. I think I will always be observed in a different way, But that’s part of what I have achieved in the world of football. Maybe when I end my career things will become quieter.”

After terminating his contract with Manchester United, Ronaldo’s move to a Saudi Pro League side has shocked the entire soccer world. Many fans went on to criticize the Portuguese as they believed that the player was lured by the money. According to various sources, Al-Nassr has agreed to make him the highest-paid soccer player in the world, with more than $200 million per year. In his first press conference for the club, Ronaldo shot back at his critics.

Ronaldo stated, “I’m so proud to make this big decision in my life and in football. In Europe, my work is done. I won everything and played for the most important clubs in Europe. This is a great opportunity for me, not only in football but to change the mentality of the new generation in Saudi Arabia.”

Cristiano Ronaldo on criticism of his choice to sign at Al-Nassr:

Ronaldo further said, “I had many opportunities in Europe, in Brazil, in the United States, and even in Portugal, but I gave my word to this club, for the opportunity to develop football in this amazing country.” Ronaldo is yet to make his Al-Nassr debut as his debut was delayed by the 2-match ban. However, it looks he might play against Lionel Messi-led PSG in a friendly match for the Al-Nassr and Al Hilal All-Star team on January 19, 2023.