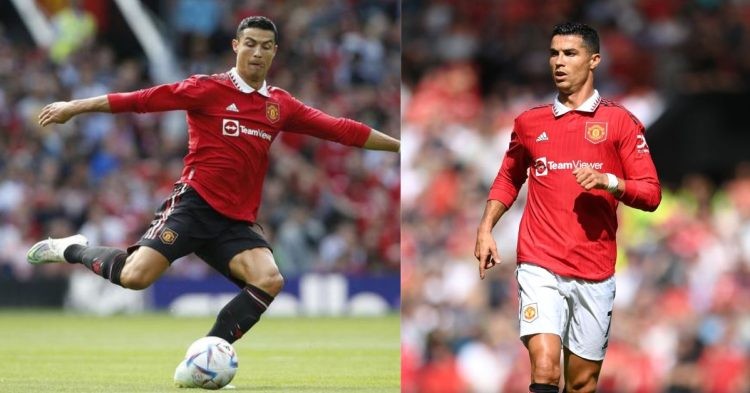 The soccer world has never seen a player like Cristiano Ronaldo until he took the world by storm. Everyone knows that he managed to impress Sir Alex Ferguson during a friendly game between Sporting CP and Manchester United. This happened in 2003, which was when Sir Alex brought the young teenager to Old Trafford. Many knew that he was talented, but no one expected how special he was going to be.

Ronaldo won everything in England with the Red Devils. At United, he won UEFA Champions League in 2008, together with 3 consecutive Premier League titles, and many other honorable accolades. One of the biggest points during his Man Utd career was CR7 set the record for most goals scored in a Premier League season (31). He also won the 2008 Ballon d’Or.

The no.7’s legendary abilities caught the attention of European royalty, Real Madrid in 2009. They splashed the cash for him and brought him to Spain for a world-record deal of £80 million. That was the start of something truly magical, as he changed the beautiful game forever at Madrid.

After scoring 450 goals in 438 games for Real, and winning 4 UCL titles with them, Ronaldo felt it was time to leave the Spanish city. Many rumors mentioned that he wanted to leave because of his strained relationship with the President of the club, Florentino Perez. But neither party has revealed the real reason why Ronaldo chose to leave despite having a successful time.

A closer look at Cristiano Ronaldo’s legendary career so far

The Portuguese forward went to Turin to join the Italian club Juventus after the 2018 World Cup. They were looking to win the UCL despite coming close numerous times. Hence, they bought the player who knocked them out more than once. Ronaldo had a fairly successful time at Juventus, scoring 101 goals in 134 games, according to Transfermarkt. Despite winning the league twice, Ronaldo could replicate the UCL success he had at Madrid.

That was the time when Manchester City came calling. There were strong reports of Ronaldo moving to his former team’s noisiest neighbors. However, United swooped in at the last minute to sign the legendary player for a second time. It was the reunion that Man Utd fans had been waiting for. Ronaldo signed a two-year contract with the English club, which saw him earning £480,000 per week.  On his first game back at the Theatre Of Dreams, Ronaldo scored a sensational brace to remind fans that he was indeed back. He brought hope and belief back to Old Trafford, something that had been missing since Sir Alex’s departure. However, it seemed like it all went downhill for United since then. They finished outside the Top 4 and lost to Atletico Madrid in the UCL.

That meant that they failed to qualify for the 22/23 Champions League campaign. The fact that the UCL’s greatest player and highest goal scorer will not even be playing in the competition. As the season began in August, United was off to a rocky start. They lost to Brighton and Brentford embarrassingly and things were not looking for Ronaldo.

Will Cristiano Ronaldo hang up his boots at Manchester United?

He has struggled to break into the starting lineup this season as it seems like Erik ten Hag trusts his younger players more. Ronaldo has only managed to score two goals for the club this season and retirement rumors have started to emerge. During the summer, many reports claimed that the former Madrid star was looking to leave the club after they failed to qualify for the UCL.

Ten Hag: “I want to support Cristiano Ronaldo as good as possible. I want to get the best out of him”. 🔴🇵🇹 #MUFC

“He’s in better shape now and I’m happy with that”, ten Hag added via @utdreport. pic.twitter.com/LIzXn1ttkG

However, due to his age, not many clubs were willing to sign him. In addition to that, his wage demands were also a huge problem for many clubs. Ultimately, he stayed at United after an eventful summer. Amid recent rumors of his desire to leave due to the lack of game time, ten Hag has supported his star man. He has said, “I want to get the best out of him.”

It seems like the legendary forward will continue to play on the pitch, despite being 37 years old. Although it may seem like he has slowed down, Ronaldo is still a force to be reckoned with. Recently, CR7 addressed the retirement rumors ahead of the World Cup this year. At the Quinas de Quro ceremony in September, Ronaldo said, “I will be at the World Cup and I want to be at the Euros in 2024.”

Judging from his comments, we can see that he wants to be playing at the highest level even at the age of 39. However, Ronaldo is a prime example of longevity in sports, and it shouldn’t be surprising if he is still breaking records at that age. However, the real problem will be whether he wants to leave Man Utd after his contract ends at the season. If he chooses to stay, he might sign a one-year contract with the club.