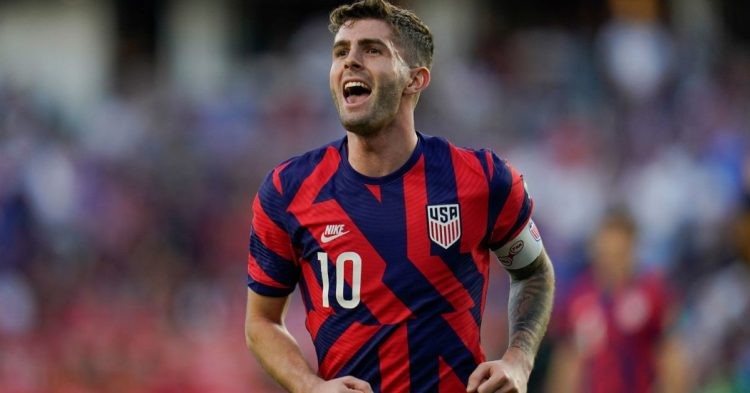 After leading his team to qualify for the 2022 Qatar World Cup, Christian Pulisic and the USMNT squad look ready to face new challenges after they were unable to qualify for Russia 2018.

Pulisic will be playing in the first FIFA World Cup of his career. The American has to stay on his toes while leading the attack in the upcoming tournament with a young USA side. DeAndre Yedlin is the only player who’s played at a World Cup with USMNT putting their faith in the younger generation.

Qualified ✅ No better way to celebrate than with @ChipotleTweets . Try my go-to order in the Chipotle app/online 🇺🇸🌯#ChipotlePartner https://t.co/Vn1b4MhvuQ pic.twitter.com/D6JJbfB2fz

Even after constantly being in the public eye, he has successfully kept his life private as no one seems to know if Captain America has found his Peggy Carter or not.

Born to college-level soccer players, Mark and Kelley Pulisic both played soccer for Greg Mason University before his mom switched to teaching, his dad, who played indoor soccer from 1991-99 and became a soccer coach after retiring in 1999.

Pulisic has two elder siblings, his brother, Chase, the eldest among the three, and an aspiring DJ with the alias “Noiseordinance” and his sister Devyn Pulisic, a successful entrepreneur who founded “Tranquility Stables” in 2019 to give lessons about horse boarding.

Even though his sister is married to Austin Sawyer, an athlete, and is a mother already, he doesn’t look in any hurry to tie the knot as the soccer star continues to achieve his dreams no matter on or off the pitch.

How old is Christian Pulisic?

Born September 18, 1998, in Hershey, Pennsylvania, Christian Pulisic is 24 years old and has been playing football for almost two decades now, the Chelsea winger first played for the Brackley Town youth team when he was 7.

After his family returned to the states in the 2000s, he played in US Soccer development academies with local club PA Classics, he also trained with the local professional club Harrisburg Islanders known as Penn FC.

Throwback to when @cpulisic_10 was a young athlete from Hershey, PA with a big dream ⚽️ We’re proud to say he’s from the chocolate capital of the world. Keep living that sweet life, Christian! pic.twitter.com/ciPmjuTKi9

In 2015 Borussia Dortmund came knocking for the youngster and placed him in their U-17 team. In the summer of 2015, he was promoted to the U-19 team, as he scored ten goals and assisted eight times.

The results of his performance came in the winter of 2015 as he was called up for a training session with the first team. He played in two friendlies providing a goal and an assist, earning a promotion to the first team.
He made his Dortmund debut in 2016 and went on to appear another 126 times for Dortmund, scoring 19 goals and assisting 26 times for five years.

In January 2019, he made his big move to Chelsea and the Premier League but the winger was sidelined due to injuries and constant change in the backroom staff, seeing him fall in the pecking order.

Pulisic’s full focus is now on the world cup as the USMNT captain wants to make his country proud after missing out on Russia 2018.