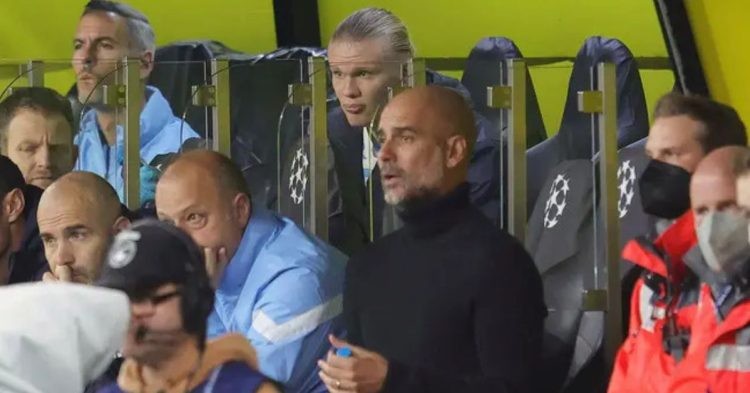 Manchester City’s Erling Haaland missed his first premier league game since joining The Citizens last summer.
He had to sit out their trip to King Power Stadium where Kevin De Bruyne scored a compelling 2nd half free-kick to take all three points for Manchester City.

Erling Haaland started the game against Borussia Dortmund for their Group G fixture in The Champions League but was subbed off after the first half on his return to Signal Iduna Park.

Pep Guardiola later revealed that Haaland was subbed off due to being wearied and suffering from a knock in the foot and a minor fever same as Joao Cancelo. City was set to travel to the King Power Stadium to face Leicester in an away game later this week.

Haaland was ruled out of the squad to face Leicester, when asked about his health, Pep replied “He recovered from the fever, from being tired but not the knock“ he told BT sport.

Leicester City Manager, Brendan Rogers felt euphoric after hearing this news and proclaimed
“I’d be lying if I said I wasn’t sliding on my knees when I heard he wasn’t playing!”.

Pep Guardiola has given an update on the Norwegian’s fitness, stating “He has ligament damage. He feels better, we have one more week.” the City boss told BBC Sport
He won’t be playing against Sevilla as they have already qualified and remains hopeful that he can help them in their tie against Fulham next week.

With the World Cup arriving and Norway not qualifying, Haaland has six full weeks to recover before club football returns, and he can end his unparalleled debut season with a cherry on top.