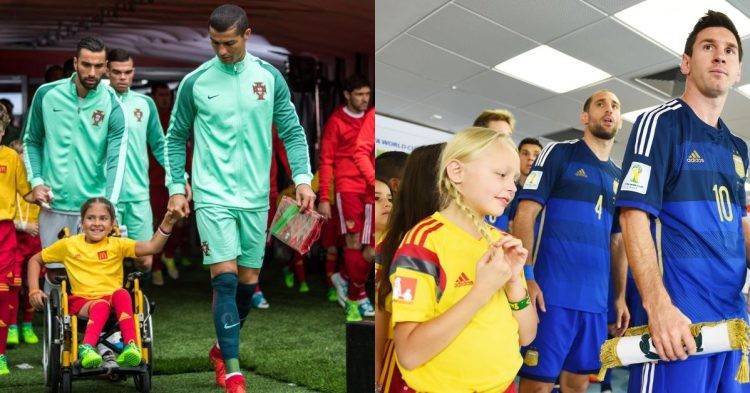 Soccer has been the sport the entire world has loved for many generations now. There have been many traditions carried over from the early days. A huge example of that would be players swapping shirts with their opponents at the end of a game. This has been done for many decades and it looks like it will continue as well. However, a habit that has become a thing as the game developed is soccer players walking out on the pitch with children.

Not many know how children ended up accompanying players as they were walking out for every game. But one thing that we shouldn’t ignore is that it has become more and more popular nowadays. But why do they really do it?

The habit of children walking with players started in the early 2000s. These children are called soccer mascots, who escort the players out of the tunnel and onto the pitch. The players will be holding the hands of the children and walking with them, but what was the reason?

Children were initially used to raise awareness for trivial matters in soccer. It started when soccer federations wanted to increase the importance of charities and children’s rights organizations. When the kids walked out with the players, there was publicity for the brand that the kids were promoting.

In the early stages, children who had the opportunity to walk out with their favorite players were either winners in a competition or were picked at random from the club’s academy. However, this practice slowly faded away as time passed. Now, the system is completely different as soccer develops and organizations have taken it up a notch.

At the FIFA World Cup, child mascots are selected through a competition. McDonald’s has been the main sponsor for the World Cup for a while now, and they are the ones to host this competition to see which kids will walk out with the biggest soccer players in the world. This has been the traditional way of choosing child mascots in soccer.

However, the method has changed over time, and now, as the sport is starting to move towards money more and more, it is the same case for child mascots as well. Now, clubs have started to charge for children to be a mascot.

How much money do Premier League clubs charge to be mascots?

There are many clubs across the soccer world to charge money for kids to walk out as mascots. Premier League clubs such as Arsenal, Chelsea, Manchester United, and Manchester City pick out the lucky children from a prize draw that is categorized based on memberships, according to MARCA.

However, some clubs like West Ham and Tottenham charge up to $850 (£700) and $590 (£485) respectively. Both of these clubs conduct a ballot to determine the winners. The numbers might be different now after a few years, especially after the pandemic that hit soccer clubs hard.

Children are brought out with players to remind everyone that the beautiful game can be enjoyed by everyone, no matter how old they are. In addition to that, seeing children might remind the players that there are young people who look up to them, considering the fact that they stand on a big stage. This will help to keep them grounded in a way as well.