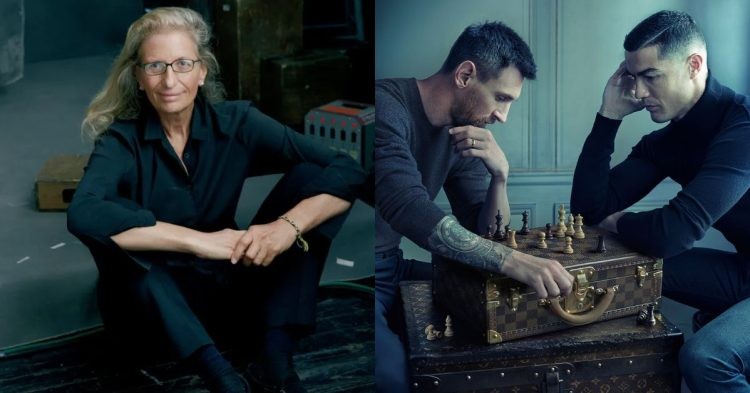 For context, Messi and Ronaldo took part in LV’s latest advertisement campaign. The fashion house launched the project with the slogan “A Victory Is a State Of Mind.” Many have been speaking about how their wish has finally come true, of seeing the two GOATs work together. However, that may not be the real case. According to a behind-the-scenes video, the two soccer plays were not even in the same room.

Another detail that has recently come to light is that the photographer of the image, Annie Leibovitz, was once in hot water for something unexpected.

Why were fans attacking Annie Leibovitz for Simone Biles’ photographs?

Annie Leibovitz is an American photographer who has been in the field for decades now. She has won numerous accolades like the Honorary Clio Award and the Glamour Award for The Visionary. Despite all this, why were fans against her in 2020 for capturing the Vogue cover which featured world-famous Simone Biles?

After all the Black talent jumping out with #VogueChallenge, Vogue couldn’t idk hire a Black photographer to shoot this cover of Simone Biles? https://t.co/6N5Oac56Su

Some of the fans had a go at Vogue for not hiring a Black photographer to capture the images. The main reason for that would be the claims of Annie not being able to bring out the beauty of Simone. In addition to that, others criticized the way Vogue and Annie set the lighting in the images.

This Simone Biles shoot drives me crazy – She’s so beautiful and Annie Leibovitz can’t get an INCH of that skin to glow. Why can none of these pRofEsSioNaLs light black skin?????? pic.twitter.com/k0lGHEPspx

This photo of THE Simone Biles for Vogue magazine was taken by “THE” Annie Leibovitz. How a person can work as a professional photographer for decades and still be this bad at lighting and photographing dark skin is baffling to me. Annie are you ok? pic.twitter.com/ycaH9LxsLL

Annie was slammed by the fans for not capturing Biles under the best lighting. It seems like she might have taken the criticism well over the years. This year, she has managed to capture a jaw-dropping image of the Messi and Ronaldo, two of the greatest sporting stars in the world.