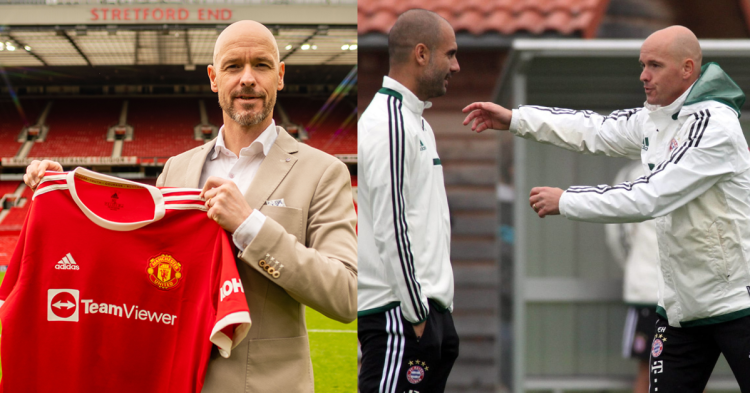 Erik ten Hag, manager of Manchester United, has been dubbed the “Mini Pep” during his time as an assistant coach at Bayern Munich. The nickname is a reference to Pep Guardiola, the highly successful coach of Bayern Munich and Manchester City, who is known for his innovative tactics and emphasis on possession-based soccer.

ten Hag‘s work as an assistant coach under Guardiola at Bayern Munich was instrumental in helping the team achieve success on the field. He was responsible for implementing Guardiola’s tactical vision and ensuring that the players were well-prepared for each match.

His ability to effectively communicate Guardiola’s ideas to the players and his dedication to helping the team succeed earned him a unique nickname.

What was the relationship shared between Pep Guardiola and Erik ten Hag?

Both Erik ten Hag and Pep Guardiola have shared a close relationship and it is certainly because of the time they spent together at Bayern Munich. They only have good things to say about each other and ETH even goes on to say that he learned a lot from Guardiola and his style of play. Many pundits have gone on to say that ETH has a similar style of play as Pep’s.

Ten Hag’s work also played a key role in Bayern Munich’s success in Europe, where the team reached the semifinals of the Champions League in each of his two seasons with the club.

In addition to his tactical abilities, Ten Hag is also known for his ability to develop young players. At Bayern Munich, he worked closely with the club’s youth academy, helping to develop the next generation of talent. His work with young players has helped him become the manager of his current club, Manchester United.

Ten Hag’s success at Bayern Munich has not gone unnoticed. His work with Guardiola helped the team achieve great success on the field and his ability to develop young players has made him a highly respected coach in the soccer world. His nickname “Mini Pep” is a testament to the impact that he had at Bayern Munich and the similarities in coaching style and approach with Guardiola.

After his tenure at Bayern Munich, Ten Hag returned to his native Netherlands and took over as head coach of FC Utrecht. He led the team to its best finish in the Eredivisie in over a decade and brought them to the Europa League for the first time in club history. He then went on to lead Ajax to the Champions League semi-final and win the Dutch league title.

Erik ten Hag has been a successful coach and he has proved it time and again for all the clubs he has been a part of now when he is at Manchester United, he has yet again risen to the occasion and was the reason for the happiness of United’s fan base after the Manchester derby as Manchester United ended up winning it and is again on a path of success for which the fans have been waiting for long.