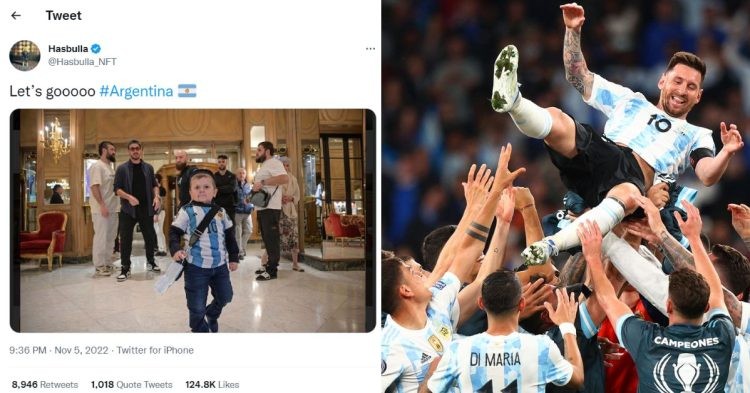 Hasbulla has become a great influence since his first appearance as Abdu Rozik’s opponent for an MMA match.
With 4.8 million followers on Instagram and 217 thousand on Twitter, Hasbulla has become a household name for sporting enthusiasts as he builds his marketing empire.

His prominence made it possible for him to work with sporting figures like Khabib Nurmagomedov and also helped him in earning a multi-year PR deal with the MMA organization UFC.

Fans react as Hasbulla comes out as  Argentina supporter

The World Cup is about to kick off, with Qatar facing off against Ecuador in the opening game. As fans dawn their favorite team’s jerseys and get ready to watch one of the biggest tournaments in sporting history, Hasbulla announced his allegiance to Lionel Messi-led Argentina.

The 20-year-old was spotted in Abu Dhabi attending and cheering his friend Islam Makhachev at UFC 280 making many assume that the internet star has flown to Qatar to promote the World Cup while others react to his favorite team.

What country is Hasbulla from?

Born in Dagestan. one of the Russian Republics in the South and on the Border of Azerbaijan and Georgia, a country known for producing fighters of great caliber no matter what the fighting style is. Khabib Nurmagomedov is the most popular fighter from Dagestan, opening the door for his fellow companions like Askar Askarov and Muslim Salikhov to showcase their skill at the highest level of the sport.

Hasbulla now 20, always wanted to be a professional MMA fighter but couldn’t fulfill his dream due to a growth deformity disease that halted his growth and rendered him a Dwarf. After hearing about his condition, he started making spoofs and skits on UFC weigh-ins and press conferences. He started by making spoofs of Khabib’s walk-ins earning him the nickname “Mini Khabib.”