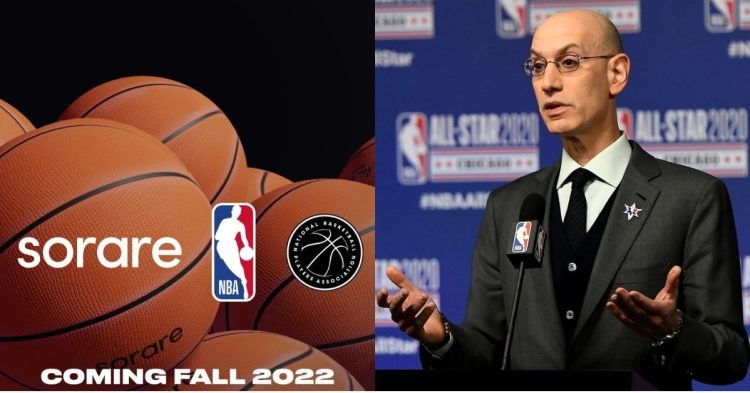 The NBA has been in existence since 1946, making it more than 75 years. It is one of the oldest sports leagues in the world. Over the years, we have seen many changes to the NBA. We may disagree with The Association for many of them claiming it destroys the spirit of the sport. However, it is safe to say that most of them have benefitted the NBA.

Very recently, the Adam Silver-led league has taken yet another step into the future. The league has officially announced of its partnership with Sorare. Traditional fans may not know what the platform is, since it has only been a few years since its developers launched Sorare.

What can fans expect from the NBA x Sorare partnership?

Sorare will become the NBA and NBPA’s official NFT Fantasy Partner. The two parties will mainly focus on releasing a NFT-based fantasy basketball game, the first one ever. The NBA will officially license the game, with player, team names, and logos. The most interesting point to note is that the game will be free-to-play. Although an official release date isn’t announced, we can expect the game to launch during fall.

After the announcement, Adam Silver has commented on the news. He said, “Our partnership with Sorare will give NBA fans an entirely new way to engage with our teams and players. With Sorare’s emerging NFT fantasy platform, we see significant opportunities to broaden our community of fans and grow NBA basketball around the world.”

Users can purchase and collect cards of their favorite players in NFT form. These cards will be using the Ethereum currency. After making a lineup, gamers will be able to join leagues of their choice to earn rewards. In addition to that, the game will provide users with several free cards that cannot be resold. This will be for those who do not wish to get into the NFT market.

It’s happening. The NBA is coming to Sorare! 🏀

Sorare currently has deals with many entities across the sports world. The platform is based on Etheruem, similar to most of the NFTs. The Paris-based company initially started in the football world, with its fantasy game for the sport. Later, Sorare expanded their services after partnering up with MLB. It seems like they aim to take over the fantasy sports industry next after signing with the basketball league next.