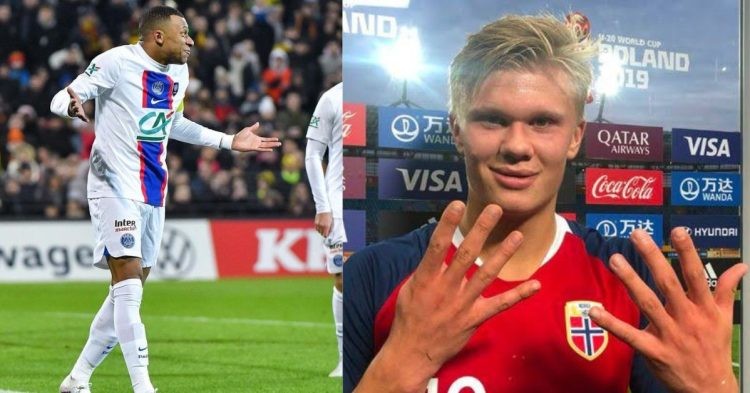 Currently, Kylian Mbappe and Erling Haaland are two of the most feared attackers on the planet. Despite being in their early 20s, both of them have been scoring ridiculous volumes of goals. Fans believe that Mbappe and Haaland are the duos that can trigger the biggest upcoming individual rivalry. A recent Mbappe masterclass has ignited that conversation.

Recently turned 24, Kylian Mbappe is having a fantastic season with PSG. He also had a terrific World Cup campaign with France about a month ago. Although a lackluster French side couldn’t compete with a robust Argentinean side in the finals, Mbappe dropped one of the best performances in the history of the tournament. He scored an amazing hat trick to keep France in the match.

Erling Haaland on the other hand had a meteoric rise from the Australian Bundesliga couple of years ago. His performances for RB Salzburg in the Champions League caught every top European club’s eye. Since, he has played for Borussia Dortmund and now playing for the defending Premier League champions, Manchester City. A well-oiled Pep Guardiola machine has helped us see him scoring and breaking records with ease.

Mbappe has clearly shown us, that he is the one for the future and for the present. Despite being only 24, the Frenchman has played in two consecutive World Cup finals. He won the Youngest Player of the Tournament award in the 2018 World Cup when he was only 19. This time around he won the Golden Boot for scoring 8 goals across 7 World Cup matches.

The Frenchman has been often criticized for playing in Ligue 1. Last year his crazy transfer saga with Real Madrid ignited the criticisms even further. Fans have said that he’s afraid to play in a more difficult league. But in reality, it is very much evident that he will absolutely stomp any league he will step in.

A couple of days ago, he gave us another glimpse of his brilliance for PSG. PSG beat sixth-tier French side Pays de Cassel in a Coupe de France tie by 7 goals without any reply. The young Frenchman came onto the pitch captaining his side and delivered an absolute demolition job. He scored five times in the PSG victory. An incredible skipper’s performance fired the French giants in the Round of 16 stage of the Coupe de France.

Erling Haaland has been a different goalscoring monster since his transfer to Manchester City. He completed a $60 million move from Borussia Dortmund to the English champions in the summer of 2022. Everyone expected him to score a lot of goals for the Manchester-based side, but he has well and truly exceeded those.

Although Manchester City is currently second in the league, behind an exceptional Arsenal side, Haaland has done his job perfectly. He has played 16 of City’s 20 league games and is currently sitting with 25 goals. He is the highest goalscorer of the season, 9 ahead of Tottenham’s Harry Kane.

Haaland had his breakthrough moment in the 2019 FIFA U-20 World Cup. An 18-year-old Haaland was called-up for the Norwegian side and failed to impress in his first two matches against Uruguay and New Zealand. However, against Honduras he made history. Before the end of the first 45 minutes, he chipped in with 4 goals and scored 5 more in the second half of the match. Norway won the match 12-0.

In the post-match interview, he said, “I would have liked to have made a double-digit number, but it was nine and I am satisfied.” At the end of the day, Kylian Mbappe and Erling Haaland are very different types of players. Mbappe is a much more all-around package compared to Haaland. But the one thing they have in common is their deadly goalscoring instincts, which can make them start the next big rivalry in soccer for a long period.