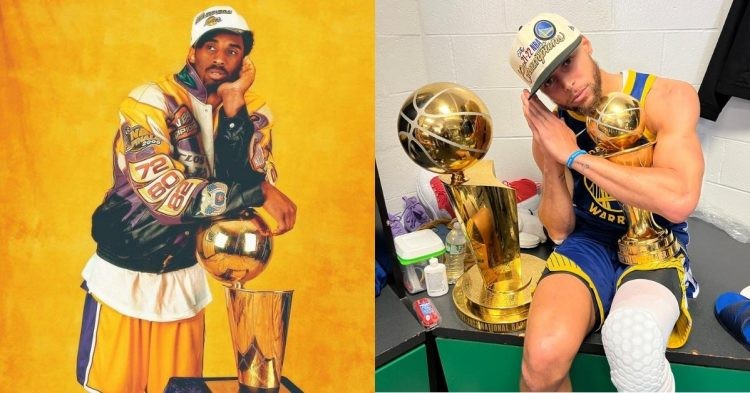 Stephen Curry and the Golden State Warriors stunned the NBA world when they beat the Boston Celtics for their 4th Championship in the past 8 years. The Warriors were not the favorites to win by a long shot, but the greatness of Stephen Curry combined with consistent performances from his teammates led this team to the top. It has truly been a career year for The Chef.

This was his slump year, btw. 🐐 pic.twitter.com/CNgvi9XSDE

Even before he erupted in the finals, Stephen Curry was having a historical season. He made a total of 92 three-pointers in the postseason, and he has scored 80+ three-pointers in the playoffs a total of 4 times. Every other player in NBA history combined has only done it once. Stephen Curry is ridiculous and now that he has that crown jewel in the form of a Finals MVP, no one can question his greatness.

Apart from everything else, Steph also reached an insane milestone that has only been reached by Kobe Bryant within the last 20 years!

Stephen Curry and Kobe Bryant are the only players in the last 20 years to have 5 of the 6 highest scoring games (outright) of an NBA Finals series.

Jayson Tatum may have thought that he would be the one mimicking Kobe but that is simply not true. Stephen Curry joins Kobe Bryant as the only two players to have 5 of the 6 highest-scoring games in an NBA Finals series. The only player from this year’s finals that can be mentioned in the same sentence as Kobe Bryant is Steph.

Year 13 for Kobe and Steph were quite similar, before the season, their ability to win was being questioned, and they had their legacies on the line despite having 3 rings each. But, after dominating the season both of them went on to win their 4th Championship and 1st Finals MVP. After this season no one can question Steph’s status as an all-time great.