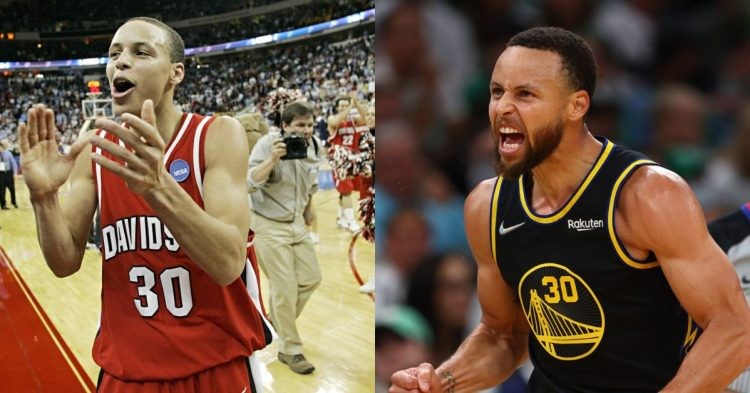 Stephen Curry is the star point guard for the Golden State Warriors. He is the greatest three-point shooter in the world and has proven to be an efficient scorer throughout his career. Curry is 6’3 and does not appear to be much larger than the average person. This makes him quite relatable and explains why he also has a large following.

Several fans could just jack up a three-pointer and would likely imagine being Steph for a second. That is the extent to which he has impacted the game. It is easy to marvel at Curry for the player he is today. However, it is equally important to look back to where he came from. This will help us understand his journey and what it took to get to where he is today.

We are quick to forget that Curry has several relatives who have played in the NBA. His father, Dell Curry was with the Charlotte Hornets. His brother Seth is currently with the Brooklyn Nets. Additionally, his brother-in-law, Damion Lee has recently been acquired from the Warriors by the Phoenix Suns. Therefore, it is pointless to say basketball has always been a part of Steph’s life and family.

Dell Curry was a huge reason both his sons are professional basketball players today. He used to take them to his warmups during his time with the Hornets. There, the children would have the opportunity to take shots on an NBA regulation hoop. Therefore, this must have played a huge role in the development of Steph’s shooting ability.

Despite having an excellent shot, Curry did not have a powerful or athletic build. He seemed quite skinny and weak. Therefore, he was not on the radar during his time with Charlotte Christian school. His play spoke differently as he led them to three conference titles and established himself as a real basketball player.

Curry’s journey to the NBA draft

Steph decided to attend college at Davidsons. The name of the basketball team there is the “Davidson Wildcats“. There he led them with 29 wins and 5 loss records. Moreover, Curry already displayed that he was a talent to be reckoned with during his time with the Wildcats.

He did so by making his 113th shot and breaking the record in the NCAA freshman season record for three-pointers. In his final season with the Wildcats, he averaged 28.6 points, 5.6 assists, and 2.5 steals. This drew the attention of some analysts and scouts as he applied for the NBA draft.

In the 2009 NBA draft, Stephen Curry was chosen as the 7th pick in the first round. This was a star-studded draft class filled with potential. Blake Griffin was selected as the 1st pick and James Harden was the 3rd. It is difficult to gamble and guess right regarding how these young athletes will develop and adapt to the NBA. Nonetheless, the Golden State Warriors ended up selecting Steph with their first pick.

Not many people will remember that the 4x NBA champion had quite a rough start to his career. This was because he was showing to be quite injury-prone. This was also a reason he wasn’t drafted higher in the 2009 draft. The majority of his injuries seemed to emerge at the ankle as some forms of twists or ankle rolls.

Steph averaged 17.5 points, 5.9 assists, and 4.5 rebounds in his first season with GSW. Additionally, he shot 46% from the field and 43% from the three-point line. However, he kept getting injured and was constantly sidelined. Therefore, it was difficult for the Warriors to rely on him initially and to trust him as a star capable of leading a team.

The Warriors franchise clearly knew that they were calculating risk vs reward when it came to the future of their future star point guard. He reveals in an interview, with his teammate, Draymond Green, how he had heard that the team had considered almost trading him at a certain juncture. However, they ended up changing their minds and trading away another player.

This is all long forgotten now. Since then Curry has led the Warriors to become perhaps the most successful basketball dynasty in the NBA. They have won 4 NBA titles in 6 final appearances. This is a display of extraordinary greatness over a stretch of time. It is unclear how much further the unanimous MVP will be able to grow his legacy. However, there is no arguing that he has come a far way and dealt with a lot to see success today.