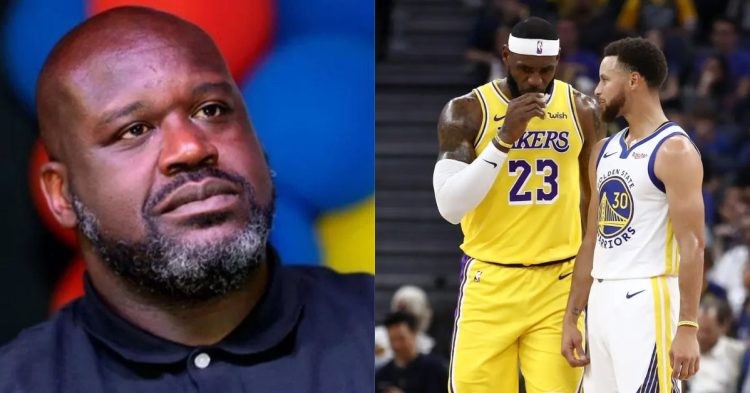 Shaquille O’Neal is a proud member of what he calls the “G14” classification. Since his retirement, he has become one of the biggest sports talk hosts appearing on NBA on TNT, discussing basketball on a daily basis.

He is very critical of the NBA players. If the players can get it done, he makes sure they know what he has to say about them.

In a league full of talent, Shaq believes there are only a few superstars in the NBA.

The hostess even mentioned Kawhi Leanord, however, Shaq does not consider the 2-times champion and 2 times Finals MVP a superstar.

Clearly for Shaquille O’Neal standards for a superstar are high. However, there are some most obvious superstars he missed out on are-

Kawhi Leonard- The Claw was part of a dynasty and won a championship and a Finals MVP under Coach Pop. He is one of the best two way-player in the game with a killer mid-range. Kawhi even led the Raptors to their first-ever championship and had one of the greatest post-season runs. As Kawhi makes his comeback he’ll be ready to be back on the championship goal.

One of the best versions of a player I’ve ever seen. 2018/2019 Kawhi Leonard pic.twitter.com/ikhV3cz9Ky

Nikola Jokic–  In my opinion is the best center in the league right now. Even after winning back-to-back MVPs (a feat accomplished by only 12 players in the history of the NBA), it is not enough in Shaq’s eyes to put him on his superstar list. He has a Western Conference finals appearance and carried an injured Denver Nuggets to the playoffs.

Luka Doncic– The Slovenian is only 23 years old and has taken the league by storm. In just 4 seasons, he has managed to get 3 All-NBA first teams to Steph’s 4. Doncic again carried his team and this year, he took down the first seed, Phoenix Suns, to advance to the Western Conference finals. He averaged 28/8/9 on 45% shooting for the season.

Joel Embidd– Embidd is the most dominant center in the league right now. He is a mixture of Shaq’s body and Hakeem’s footwork, he even became the first center to lead in scoring since Shaquille O’Neal himself. Thus he deserves recognition as a superstar.