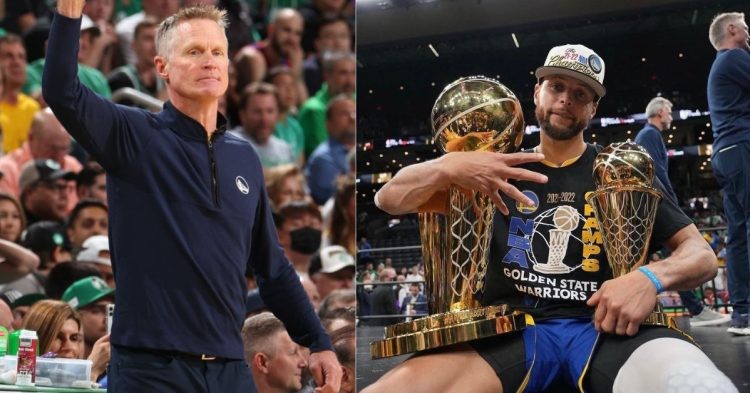 The Golden State Warriors just added a seventh NBA Championship title to their trophy cabinet. This marks their 4th title in the last 8 years. Although the favorites were clear this year, there have been times when the Boston Celtics managed to stun Steve Kerr’s team. Despite fighting back against the star-studded team, the Celtics fell to their opponents in a 4-2 defeat. It is believed by many that they fought a good battle to even bring GSW to Game 6.

Stephen Curry was one of the main differences between the two teams. His performances, especially in Games 4 & 6, really reminded everyone why he’s one of a kind. The American has averaged 31.2 points, 6.0 rebounds, and 5.0 assists in 6 games of the 2022 NBA Finals. These numbers have helped him win the 2022 NBA Finals MVP for the first time in his career, despite having dominant performances in past finals.

After the game, Steve Kerr was at the center of a press conference that was filled with praise for The Chef. The GSW head coach praised his player by mentioning that “without Steph, none of this happens”. The statement by Kerr will be something everyone will agree with after Steph’s performances this year have proven that he is truly capable of lifting others with his game.

Adding on to that, the Warriors head coach had also mentioned that Steph reminds him of Tim Duncan. Although he admitted the two players were completely different, the way they have managed to combine their talent, confidence, and humility to make everybody around them win for them is what makes them alike, Kerr claims.

Kerr has also claimed that the title win was Stephen Curry’s “crowning achievement in what’s already been an incredible career”. Earlier, he had also admitted that the Warriors were shaky at times against the Boston Celtics. The reason for Steph’s extended praise would be how he managed to show up for GSW when they needed him.

In Game 4, he gave the Warriors a 94-93 lead with just 45 seconds left. Following that, he inspired his team to a fourth-quarter comeback. Many believe that Game 4 was the turning point for the Warriors’ win. Many will understand the Baby Faced Assassin’s greatness this year and will appreciate him more, just like Steve Kerr does.

“Congrats to the B*tch A** Warriors” – Al Horford’s Sister Slams Steph Curry and Co. After Boston Celtics Loses in the Finals