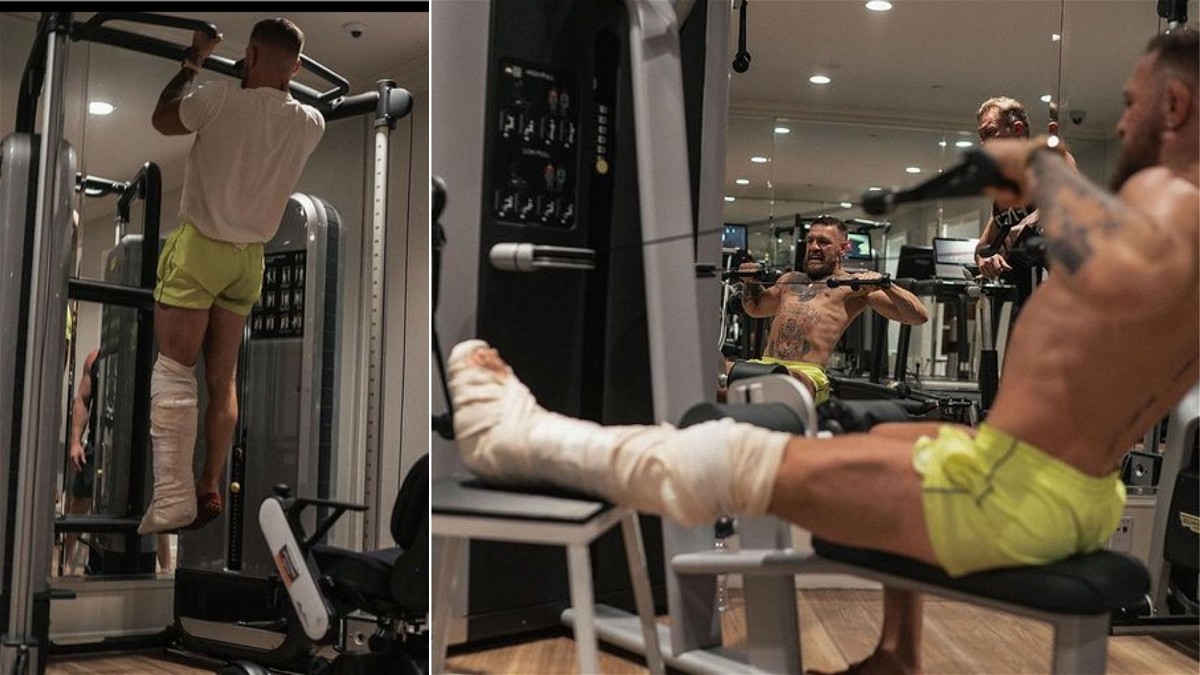 The outcome did not go in the favor of Conor McGregor when he stepped into the octagon at UFC 264. In a much-anticipated trilogy with Dustin Poirier, Conor McGregor suffered another TKO loss and a broken leg.

Though Dustin Poirier clearly won the first round, the doctor’s stoppage was certainly an anti-climatic ending to an incredible rivalry. Conor McGregor suffered a freak leg injury that will take one year out of his fighting career as he can only get back into the octagon in January 2022.

Many fans even believe that Conor McGregor might never return to the octagon after the injury he suffered at UFC 264. However, it seems McGregor is again on a mission to prove the critics wrong as he slowly rebuilds himself for his UFC return.

In a recent post, Conor McGregor gave an update on his recovery and as crazy as it sounds McGregor is already in the gym only 2 weeks after the gruesome injury. McGregor stated:

An update from Mystic Mac pic.twitter.com/XWTi05s2Vg

Also Read: “Conor McGregor made me the villain”- TJ Dillashaw on the “snake in the grass” comments by McGregor

What’s next for Conor McGregor after the gruesome injury at UFC 264?

Conor McGregor received a lot of criticism from the fans for his post-fight interview at UFC 264 with Joe Rogan. His comments on Dustin Poirier’s wife did not quite sit well with the majority of fans. However, credit has to be given to McGregor to even give an interview after such a devastating injury let alone cut a promo for his next fight.

Even the former UFC champion, Ronda Rousey praised Conor McGregor for this and stated: “I’m amazed that as soon as you hit the ground you were already promoting the next fight – I def wouldn’t have had the mind to do that.”

Also Read: “He Has Comeback From a Lot”- Michael Chandler Firmly Believes McGregor Will Return, Calls Him the “King of Promotion”

McGregor is still the biggest star in UFC despite his two-fight losing streak in the lightweight division. There are some fun matchups for McGregor in both MMA and Boxing rings when he comes back to action.

But, which route McGregor wants to go is certainly up to him. As of now, he has a long route of recovery in front of him. And if he manages to come back to the octagon and finishes his iconic career on top then that would certainly be one of the most spectacular things to witness.