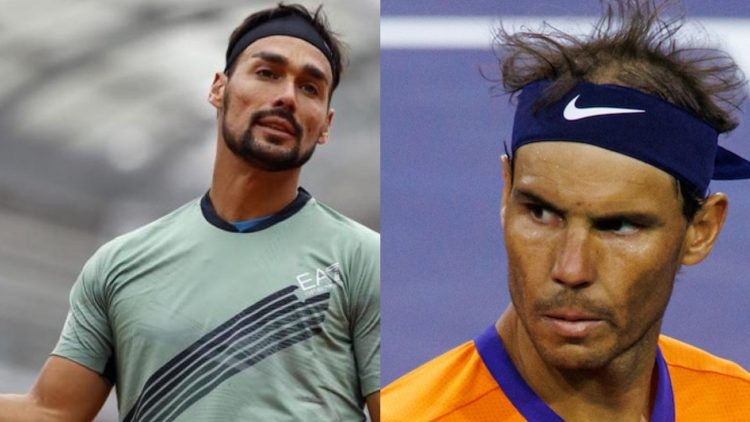 Rafael Nadal heroically won the quarterfinals fixture against Taylor Fritz after winning the tiebreaker in the final set. The match can be described as a rollercoaster, especially for Rafael fans as they had to witness yet another Nadal signature comeback.

After the match, Nadal was spotted with tape on his abs and he went on to claim that he is suffering from an abdominal injury and he had to change the way he served because of that.

Even though the majority of the tennis fraternity including the fans and the players sympathised with Nadal, there are some such as Fabio Fognini who tried to imply the fact that Rafael Nadal was in fact faking his injury in the quarterfinal match.

Fabio Fognini struggles to believe that Nadal’s injury is so serious and polemicizes so on Instagram pic.twitter.com/0sKf1mZcYr

“For sure. Guys stop believing in what you read PLEASE!!!”

However, Nadal’s fans immediately came to his defence by saying that the brown strapping on the right side of his belly, proved the fact that he was injured and the strapping was there to ease his apparent abdominal injury.

2Although, Fabio has recently put another story on Instagram, claiming that his earlier story was not meant for a champion like Rafael Nadal. He also went on to say that his statements have been twisted and blown out of proportion by the press. He finally went on to wish Nadal and his team all the best for Wimbledon.

Things surely looked grim for Rafael Nadal towards the end of the quarterfinal match against Taylor Fritz.

Fans were concerned about his fitness status and his readiness to face Nick Kyrgios in the semifinals. However, Rafael Nadal admitted to the fact that he may not be able to play in the much-awaited semifinal match against Nick Kyrgios at Wimbledon.

It was evident that Rafael was in pain as he ignore the advice of his family to quit the four-hour-long match against Taylor Fritz.

Nadal faced a battle against time in order to get match fit against the in-form and fired-up Nick Kyrgios. This is Rafael Nadal’s chance to get the first calendar slam for the first time in the past 53 years.

Nadal said that even though his family members wanted him to lay down his racket and retire from the match, it was tough for him to retire in the middle of the match. He said that he has done this before in his career as well and he just keeps trying.