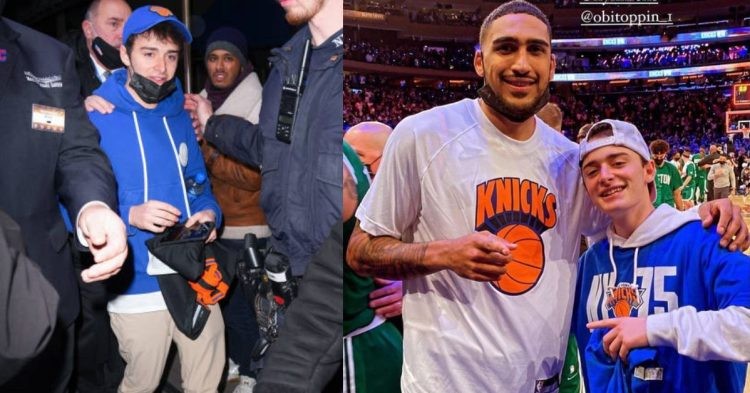 Stranger Things Star Noah Schnapp is a big fan of the New York Knicks NBA team and has been attending quite of the games. (Credit- Twitter)

Since the release of the first season of the Netflix series Stranger Things in 2016, the series and its actors have acclaimed quite popularity. The series includes famous actors like Millie Bobbie Brown, Finn Wolfhard, Gaten Matarazzo, Sadie Sink, Joe Keery, Maya Hawke, and others. Among them, the 18-year-old Noah Schnapp is quite popular. In the series, Noah plays the role of Will Byers. Besides this, the actor has an interest in sports.

While talking about his interest in sports, the actor has a favorite NBA team, the New York Knicks. Born and raised in New York City, eventually, the actor seems to root for his hometown team. Apart from this he has been seen attending some of the Knicks matches also.

Noah Schnapp is such a big fan of #NBA…❤️📸🏀 #NEW pic.twitter.com/RUIUSJWhCL

In October 2021, Noah Schnapp and his co-star Gaten Matarazzo were spotted at Sunday’s game between the Knicks and the Orlando. The two seemed to enjoy the game quite much as evident in their reactions.

Four months later he made an appearance alongside co-star David Harbour, during a Knicks vs Thunder game on 14th February 2022. During the match, they also announced the release of season 4 of Stranger Things.

Thus, the fourth season of Stranger Things is set to release on 26 May 2022 on Netflix. However, apart from Noah, Hollywood celebrities have been seen in support of the New York Knicks team. Let’s take a look into some of them in detail.

Other celebrities in support of the New York Knicks

Famous Dune actor Timothee Chalamet is too a Knicks fan. He was seen attending Knicks games alongside actors like Ansel Elgort and Ben Stiller.

Apart from this, American Comedian, Chris Rock is a Knicks fan. As a Brooklyn native, the comedian has a liking for both the Brooklyn Nets and New York Knicks but his favorite is the Knick. In an interview with the Post, he said – “I like them both. I’m just saying I’m a Knicks fan more. Hey, I like Biggie and Tupac, ok? I like Jay Leno and Letterman. But if the Knicks have a game and the Nets have a game I’m going to be at the Garden.”

Over the past 4 decades, he has become the unofficial face of the Knicks. One can see him rooting for his team throughout the day be it a bad or a good game.

Thus, the amount of fans in support of the Knicks is quite huge. Although the Knicks have not been able to deliver many wins and growth, its fan following has been great among Hollywood celebrities till today. Despite the win or loss, people are still seen rooting and supporting for their hometown team.